Last weekend I woke up to the sad news that Governor Nestor Espenilla, Jr., fondly called as Nesting, joined his creator on February 23, 2019.

I knew the governor personally and can attest to his professionalism and kindness. I will forever be grateful that he supported me in my advocacy. He was one of my “readers” for book The Retelling of The Richest Man in Babylon. He read the chapter on the first basic law of money. I will always remember his enthusiasm and encouraging words when he said, “Your book is fascinating! In so few pages and in very simple terms, it is able to deliver key messages about money. This should really be shared with a wide range of people. Your approach of simplifying the lessons make it more concrete and powerful. We should learn from you and try hard not to make it too technical and complicated!” (Click link for Chapter 4 of the Richest Man in Babylon and this link for the interview)

The first time I met the governor was several years ago when I joined an out-of-town event of the Trust Officers Association of the Philippines (TOAP), an organization where my husband Marvin once held the position of president. Nesting was with his wife Tess, who works at the USAID. Since we shared the same dinner table, I got to talk with Tess about what else but our children, a topic any mother is eager to discuss.

Nesting and Tess have all the reasons to be proud of their three children – Jackie, Nikko, and Nesty. All three children including their son-in-law Ben are all achievers. They all pursued masters and other further studies. I remember one time when I was setting up an appointment with Nesting, and he mentioned that they would be out of the country to attend the graduation of Jackie from Harvard where she took up masters in law.

Oldest child and only daughter Jackie said, “On weekends dad would go to the market himself to buy the ingredients for the meal that he will cook.” Nikko added, “He was very meticulous with the choice of meat that he would buy then he would slow cook his specialty bulalo.” When I asked who’s the better cook, mom or dad, everyone answered in unison, “Dad!”

Youngest child Nesty recalled, “Bowling was my bonding time with dad. It started when I was still a little boy and I had to hold the ball with two hands. That activity with him went on into my adult life. He’s good at it.” Nesting dabbled in different physical fitness activities like jogging, swimming, golf, gym workout, etc.

Nikko said, “In bowling, the idea was always to beat dad.” We went on to discuss how competitive the Espenillas are and with a father who reached the pinnacle of his banking career as BSP Governor, they mentioned that none of them went into banking, “We may not be able to reach something as high as what dad reached but it’s good to have an inspiring figure as your father. He and mom never pushed us to go into banking. Dad would say, ‘Do your own thing, make your own mistakes.’ He also tried to understand our different fields – law, architecture, engineering.”

Before he joined his creator, Nesting experienced being a lolo to Zev, whom he described as a healthy and very hungry baby! Zev is the son of Jackie and Ben.

As his friends would know, Nesting was very fond of dogs. They have five at home. Jackie shared, “On weekends, when the dogs would smell dad’s pinakamabahong shoes and hear his stick sounds, they would all go crazy because they know it’s time for their walk! Round 1, he walks dog number 1 in the village. Round 2, he walks dog number 2, and so on until the fifth dog.”

I asked some of the people who had the privilege to work with the governor to share their fond memories of him. Let’s hear it from them.

“It’s too difficult to come up with my fondest memory Rose. There are too many and I feel anything will fall short of what he has done and who he truly is. He was my direct boss for 14 of my 17 years in BSP. His advocacies will live on in people like you and the work that you do.” 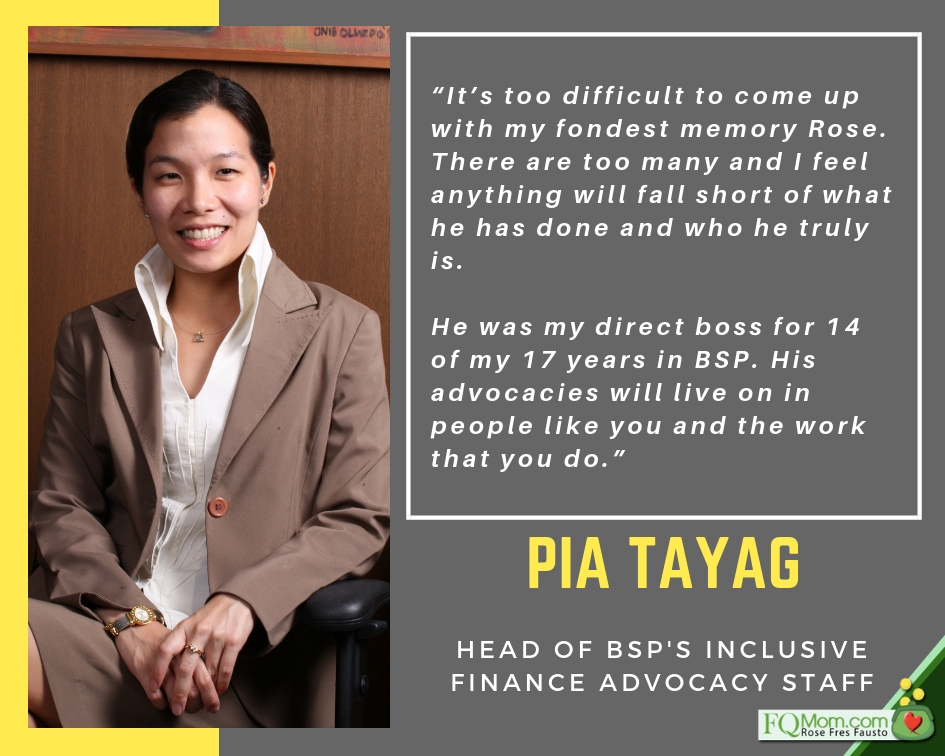 Marvin Fausto, Founding President of the Fund Managers Association of the Philippines

“I met Nesting back in the 1990s and he impressed me as a regulator who was open-minded and willing to cooperate. Later on, when I was the head of TOAP (Trust Officers Association of the Philippines) and he was the chair of the BSPC (Bank Supervision Policy Committee), I saw his eagerness in instituting reforms in the industry with the proper balance of control and freedom. I always looked forward to him joining our meetings because his presence would mean speedy resolution of issues. Even in our structured meetings, he would inject a casual atmosphere that would lighten up the work. In our themed events and conventions, he would be game to come in the proper costumes!” 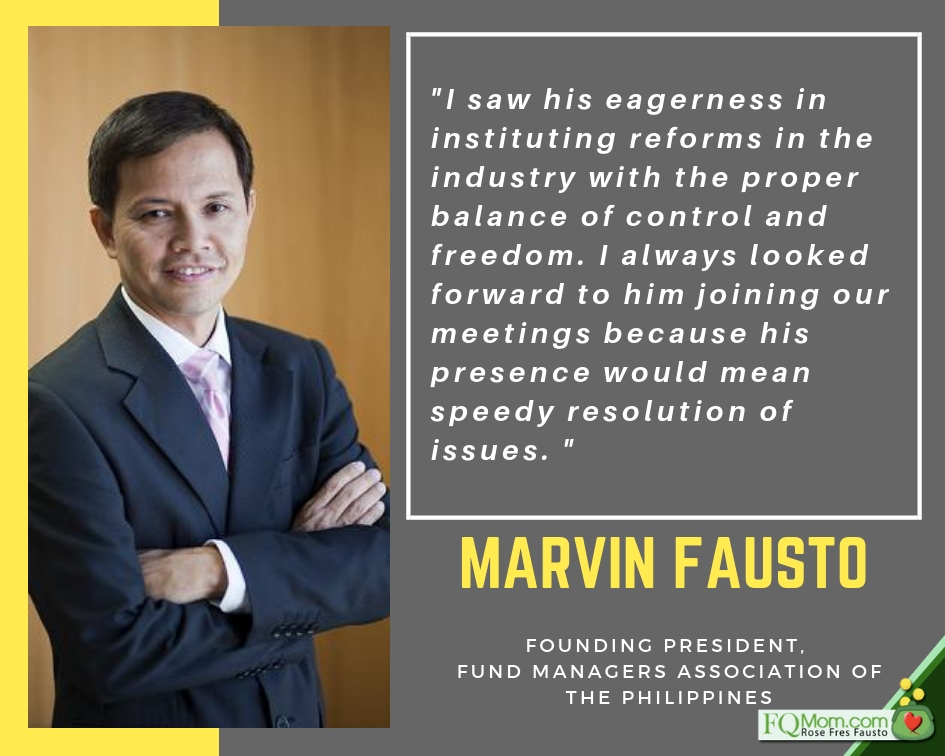 “My fond memories of Nesting are those times at BSPC meetings as it showed his sincerity in effecting market reforms through working with all stakeholders. He personally attended the meetings as Deputy Governor, that’s why issues were resolved quickly. I also remember he was our keynote speaker at the very first FMAP (Fund Managers Association of the Philippines) convention in Boracay. He brought his wife Tess with him. His openness and sincerity endeared him to FMAP.” 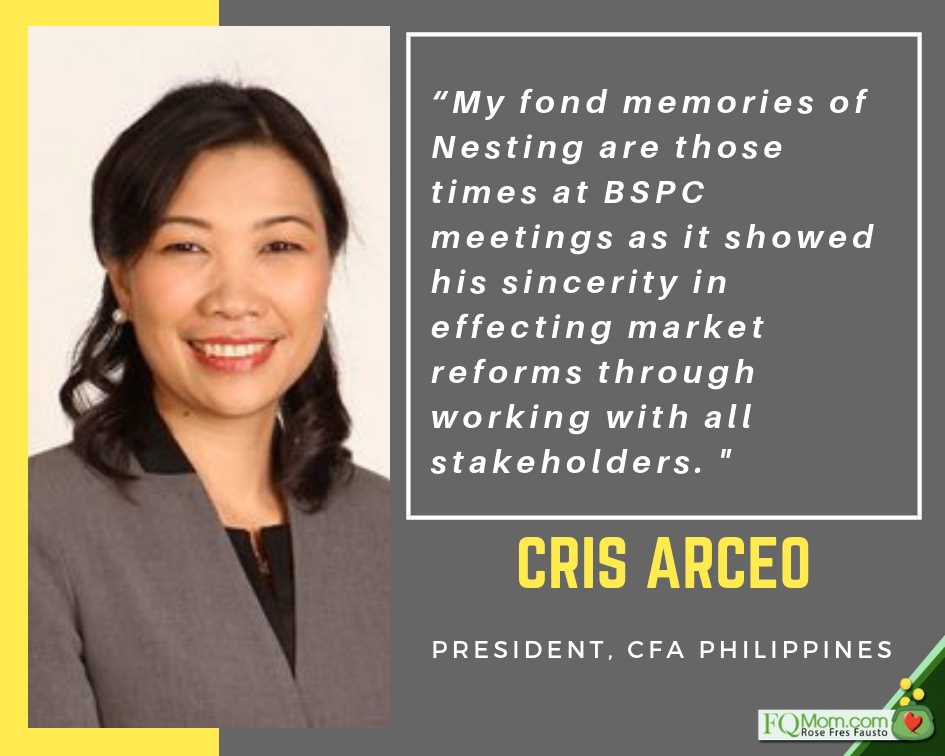 “I remember visiting him at the wake of his father. It was an odd hour, maybe 11 in the morning so there were not a lot of people and we got to sit down and talk. That talk was not our usual conversation as regulator and regulatee but more like a conversation between friends. He shared with me that his father was a lawyer and wanted him to be a lawyer also, but he didn’t become one. That’s why at that time I think he was encouraging at least one of his children to become a lawyer. That was a good opportunity for me to see the inner side of Nesting.” 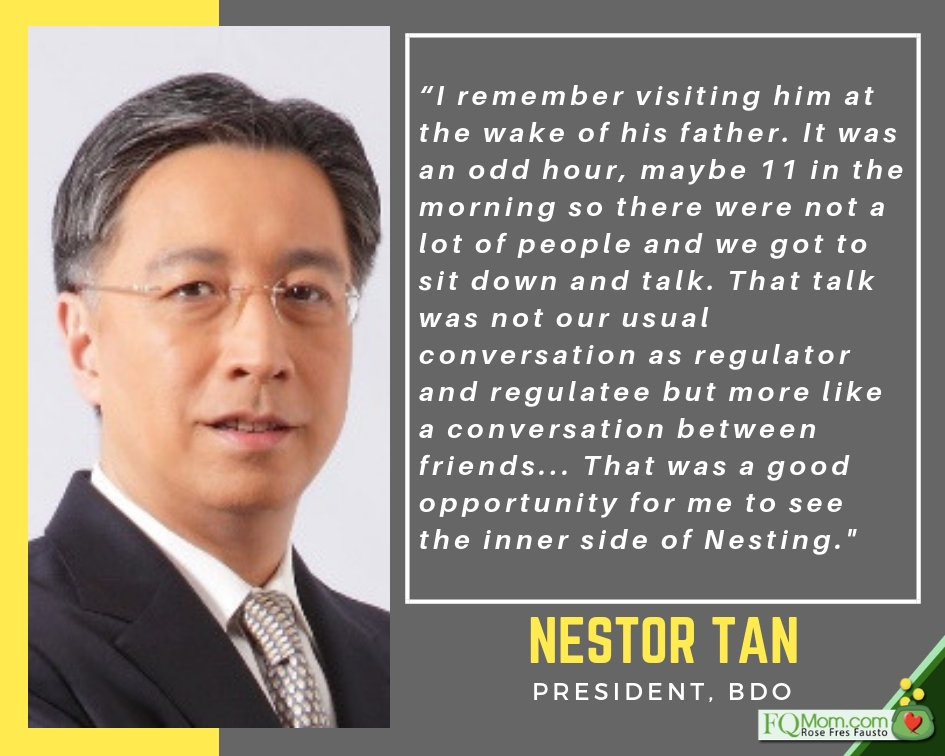 Tony Lambino, Assistant Secretary of the Department of Finance

“There was an event where the governor and I were both speakers. This was at the National Press Club last year. He was running to another event and had a very tight schedule that day. But when I was introduced, he stopped and sat down somewhere at the back of the room to listen. And I saw him listening, no fiddling with gadgets or talking to people around him. He was certainly more knowledgeable on the topic and yet he took time to listen to a junior member of the economic team. He personified humility despite the great office he held. A true role model for all public servants.” 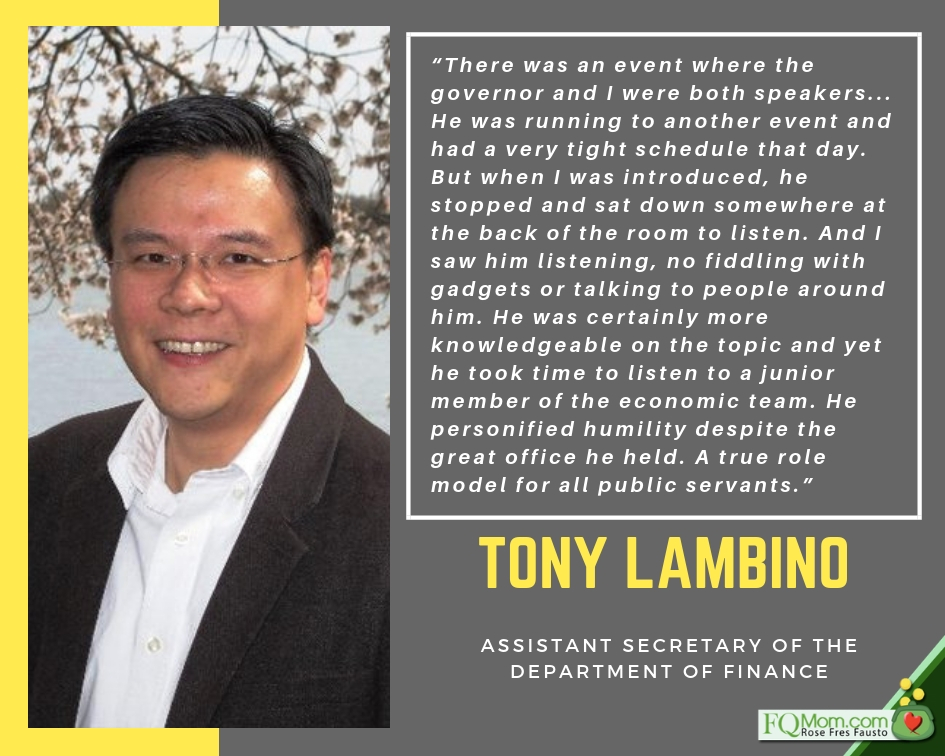 “Governor Nesting was a consummate professional and a joy to have served with during my time in government. He was my favorite go-to person at the BSP when I had a question; he gave complete and lucid briefings, and spared you the feeling of being talked down to. To him, good was the enemy of great, complete staff work. He held himself (and his team) to the highest standards, and we were all the better for it.

He was thrifty with his smile, but never when you talk to him about his family and his dogs. He was as devoted to his family as he was to his public duty. I remember in one of our official trips to Washington, he asked his daughter who was then living in Atlanta to come to DC so he could spend precious time with her while he was attending to his official duties.

I have always held the deepest respect for the BSP as a strong, independent, and competent organization. Gov Nesting was both a product and a champion of that institutional strength, an example of how excellent Filipino public servants can set out to be. We’ve lost a fine central banker too soon, but I trust his legacy lives on in both the humble character of service he exemplified and the ambitious vision of his reform and financial inclusion agenda.” 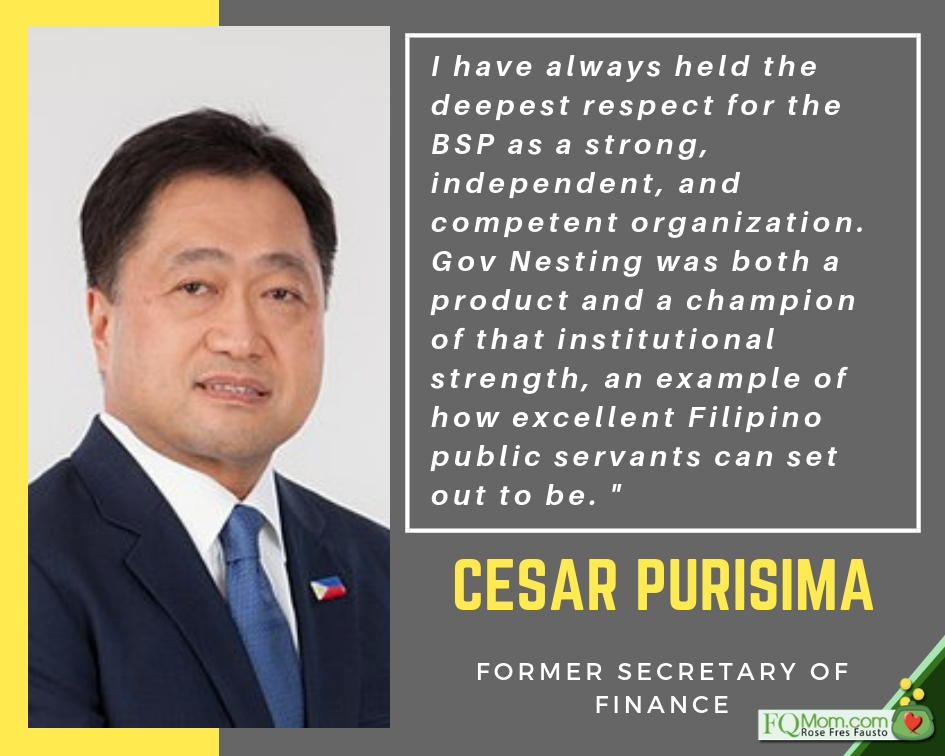 It was indeed a privilege to have known Governor Nesting and his family. May his legacy of financial inclusion continue and benefit the Filipino people. 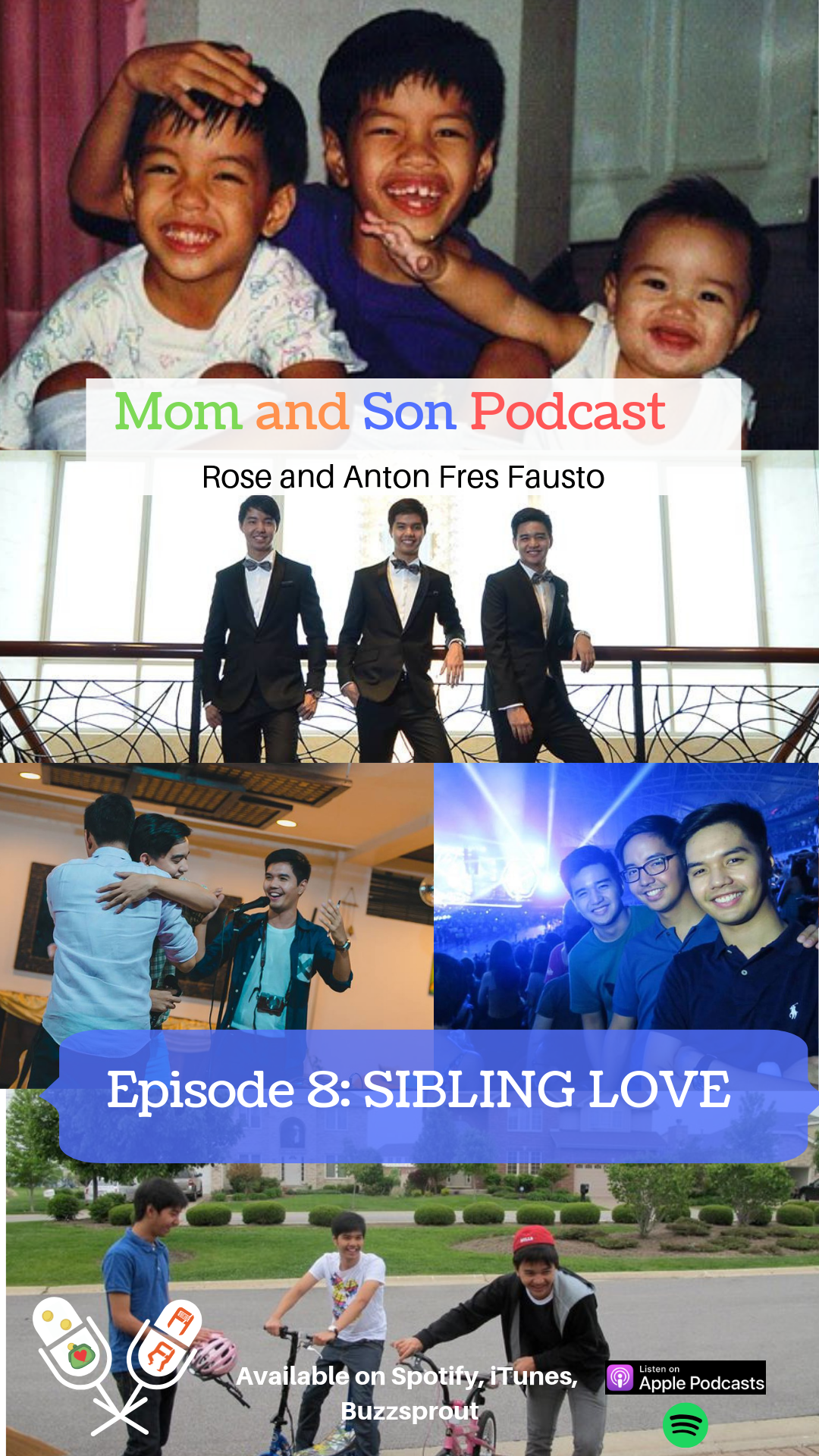 Join our fun brothers’ conversation (with mom) by clicking any of the following links:

For our future episodes, you may send in your comments and suggestions to AntonFausto@gmail.com.

ATTRIBUTIONS: Photos of the governor taken from the Facebook page of Tess Espenilla, other photos from PhilStar, gulfnews.com, Wikipedia, aseanbankers.org, beyonddeadlines.com, clix.com.ph, and manila40.devex.com modified and used to help deliver the message of the article.