Investing is for everyone! That has been our mantra since way back the early years of our marriage. Our young sons and even members of our household staff have investments. And the long-term investment of our choice is the stock market.

We’ve tried investing in a couple of businesses several years ago and the greatest return we got was not monetary but the lesson, “Get only into a business that you understand or have a big passion for.” That’s the second basic law of money in my latest book. If you get into a business you’re not particularly keen on, you will lose interest once the bottomline dwindles. And that’s the sure formula for failure. There has to be something you’re crazily stubborn about the business that will make you go on and on until you finally make it. So if you’re in it just because your friends or neighbors seem to be doing well at it, think again. But if you have something that you’re insanely passionate about that you wouldn’t mind doing it for free, then you might just be the next big entrepreneur!

Real estate is another form of long-term investment. A lot of people dream of owning properties from which they would collect rental income until their retirement years. There is a certain attraction to the thought of just collecting rent and at the same time owning a very tangible real asset whose value appreciates over time. Well, until they encounter difficult tenants, maintenance headaches, exorbitant homeowner’s dues and some additional taxes not previously present in owning properties which are not your primary abode. But then again, if you’re passionate about constructing and renovating, have an eye for diamond in the rough properties and have the ability to turn them around and make handsome profits, then this might just be your cup of tea. You might just be the next Andrew Tan!

Of course, everyone has to have fixed income investments. Despite the very low returns we get from them these days, they have a role to play in our portfolio. They provide the stability that we all need for a certain percentage of our total assets, depending on our age and needs. But please, make sure they just make up a certain percentage and not your entire investment portfolio.

Now comes the stock investments, one of the most, if not the most, misunderstood asset class. The average person would always equate stock investing to the riskiest and most volatile investment, reserved only for those with lots of money.

The second notion that it’s only for those with lots of money is no longer true. Well, yes, those with tons of money may still lord it over in terms of day-to-day stock manipulation, but if you’re investing for the long term, you should not mind them too much. There are now options to invest in equity funds for as low as P1,000 per month. So if our household helpers can do it, everybody should be able to do it. (Note: During our lunch meeting last month with Bo Sanchez, author of bestselling book My Maid Invests in the Stock Market, together with his wife Marowe, I learned that their maids are nearing the P1 million mark and may join the millionaires club in no time!)

Last week, the Bangko Sentral ng Pilipinas reported that the land values in Makati CBD and Ortigas continued to increase while office vacancy rates dropped in the second quarter of 2014. And this is good news. It’s a sign of continued growth and positive prospects for the country.

I decided to review the data I used in my article in late 2013 entitled You May Be Manic Depressive But You’re Still My Favorite (Why stocks are still on top of my list, part 1) and part 2. I updated the land prices and PSEi and here’s what I found out. 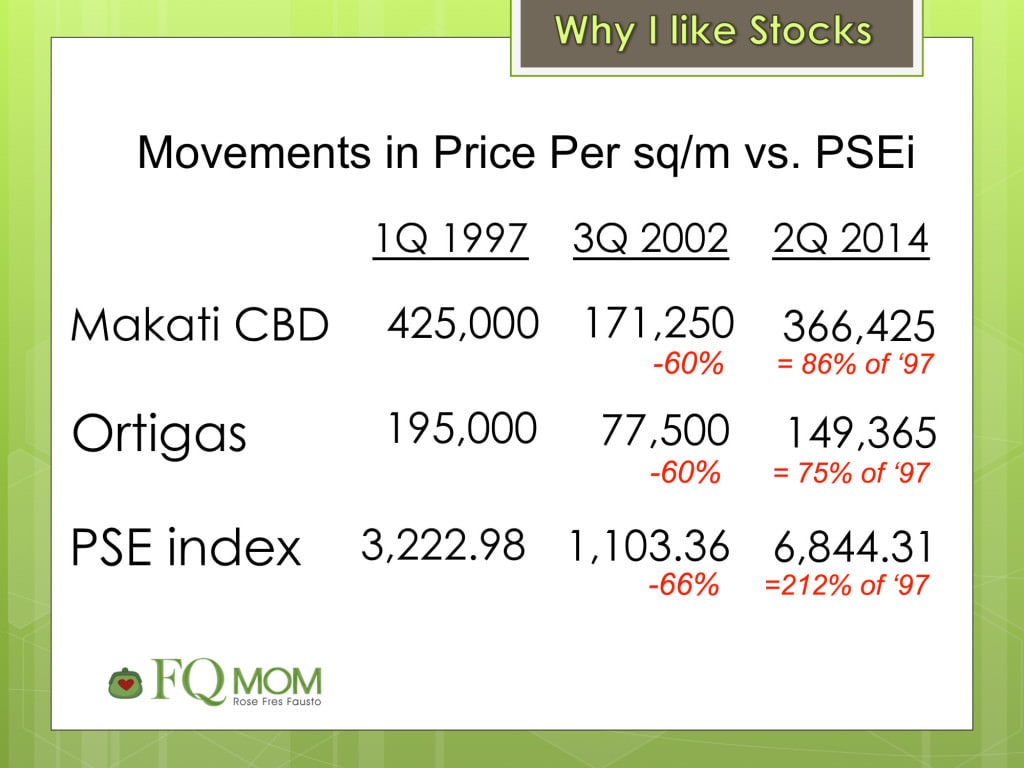 But let’s take a look at their second quarter of 2014 (the BSP positive report of increasing land prices). Makati CBD was recorded at 366,425 while Ortigas was at P149,365, only 86% and 75% of their 1997 nominal prices, respectively. They have not fully recovered even the nominal prices of their 1997 levels. 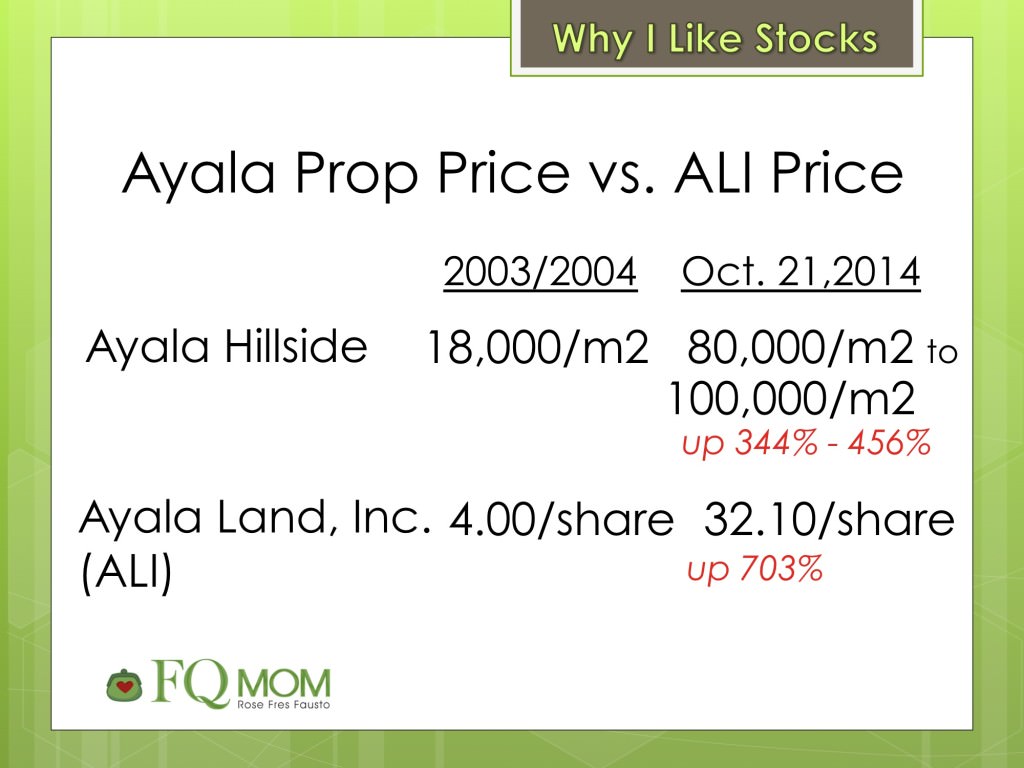 So why does the stock market provide the highest return in the long run?

I wish to share how my husband would explain it to our sons when they were younger, and to our nephews and nieces who were willing to learn.

He compared the three asset classes: gold, land and stock. He said, “An ounce of gold will always be an ounce of gold. A parcel of land will always be a parcel of land. But a share of stock of a well-managed company will no longer be the same years from now.” He would use Jollibee as an example, which is easy to understand for children. Back in 2003 Jollibee only had a few branches in the Philippines and the stock was trading at P18.00/per share. Now, with over 2,000 stores worldwide, it’s P188/share, that’s over 10 times in a little over 10 years, truly a yum of an investment!

Of course, there’s the ease of buying and selling when it comes to stock investing, no need to accumulate a substantial amount of money before we can start investing, and many more. Read You May Be Manic Depressive But You’re Still My Favorite (Why stocks are still on top of my list, part 1) and part 2 to see the other advantages as well as the things we have to watch out for in stock investing.

But the important thing that I want to stress is this: Even with all the positive arguments and extensive body of evidence that stock investing should be for everyone, only a miniscule less than 1% of our growing population of 100 million is invested in the stock market.

Based on the Nielsen study, our internet penetration is 32%. And that’s despite having one of the slowest internet connectivity speed in the world!

We have one of the fastest growing stock markets in the world and we’re not even 1% invested! Something is so wrong somewhere!

I long for the day when we will finally make a significant dent and at least approximate our internet penetration. Let’s start by taking a look at our own portfolio. Let’s explain to others what stock investing is all about. Let’s invest our children’s cash gifts in the stock market. Let’s encourage the people within our circle of influence to take advantage of this growth. If you’re a business owner or in the compensation department of your office, include an easy-to-invest-in stocks feature in your payroll. If you have household helpers, invest their retirement money in the stock market. But remember to consider it long-term investment.

If we’re able to do the above, then we can really say that stock investing (not active trading) is for everyone!