Last Sunday we had a video shoot for our Family FQ Workshop in Iriga City scheduled on September 6, 2015. That’s right, the Fausto family is going to the land of Superstar Ate Guy. This is being arranged by Beam and Go, an online platform that helps OFWs have some control in their pera padala by sending specific gift certificates so that when the hardworking OFW sends money supposedly for the medicine of lolo, the money won’t be spent on a new cellphone or other things.

After the shoot, Beam and Go co-founder,Mariliese Tan sent me a note saying, “Thanks for spending your Sunday afternoon with us. We enjoyed meeting your boys. When I have kids, I wish they would be as smart, filial and financially savvy as they are.” Thrilled to read her message, I shared it with the boys. They said, “Wow! Filial!”

This, plus meeting successful adults who remain very devoted to their parents have made me reflect on the importance of this adjective filial. The word comes from the Latin words filius(which means son) and filia(daughter). The word filial is defined as “of or due from a child,” meaning to say, obligation or duty of the offspring to the parent. Filial piety, which is very Confucian in philosophy, is the virtue of respect for one’s parents and elders.

In our predominantly Christian country, we are expected to “Honor thy father and mother.” And we always address our parents with respect. We even address our parents’ friends as Titos and Titas. In our places of work, we address our superiors as Ma’am and Sir, Mr. and Miss, or Boss.

Fast changing times have made our concept of filial piety evolve. For one, we have been told to allow our children to express their feelings. Some have gone to the extreme of being friends with their kids, even allowing their youngsters to call them by their first names. Ugh!

I admire the Chinese Filipino families in the sense that they are clear on their expectations from each other on this matter. I think the oldest son is expected to take care of the parents, which means that the daughter-in-law will be the homemaker of the house taking care of the aging parents of the husband. Wow, quite a challenge! But at least, they already know what to expect.

In the Filipino family set-up, it’s usually the oldest daughter, the Ate, who’s expected to take care of the aging parents. That’s why when Marvin and I decided to just have three sons, we always got this remark, “Naku, kailangan nyong anak na babae, walang mag-aalaga sa inyo, pag tanda nyo!” But we always felt that it’s not the gender that matters.

I grew up hearing my mother say that parents have an obligation to take care of their children while growing up, but children don’t have an obligation to their parents. However, we saw her being devoted to her own parents in their old age, so we also grew up believing that even if it’s not the children’s obligation, it is still the noble thing to do, to take care of your parents in their old age. Now maybe that was my mom’s plan, not to oblige us, but to receive our love and care on a voluntary basis. Come to think of it, it is so much sweeter to receive that filial piety from your children when it is not imposed but given freely.

So how do we raise filial children in this time and age?

You may have other ways in mind. You’re welcome to share them here. If there’s one single parenting philosophy that seems to tie all the above, it’s the old adage that we should always remember, “What you sow is what you reap.” 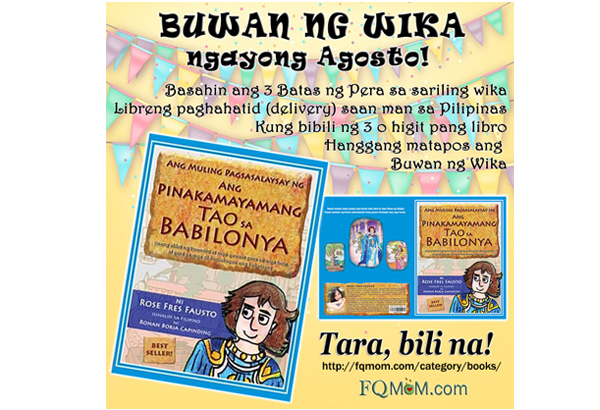 2. I will speak at the Cavite State University (yup the same school where Binay delivered his “TSONA”

on August 19, 2015 at 1pm to discuss Personal Finance The High FQ Way with the students.

3. I will speak at the Harvard Project for Asian and International Relations on August 22, 2015 at the DLSU, Taft Ave. at 3pm together with my son Martin. We will discuss financial literacy before an audience of young entrepreneurs, graduate and undergraduate students from US, Europe, South America and Asia.

4. You may be interested to watch Ang Tatlong Yugto; Tatlong Babae – a play by Liza Magtoto, which features a story of 3 women and their journey through life on August 28, 2015 at 2pm at the GSP 901 Padre Faura St., Ermita, Manila.

5. The Family FQ Workshop by the Faustos goes to Iriga City on September 6, 2015! This is being arranged by Beam and Go, an online platform that caters to OFWs and others who support their families in an affordable and transparent way.

Attribution: Photos taken for Family FQ Workshop goes to Iriga City, images from moonfest.com.sg and mysinschew.com put together by the author to help deliver the message of the article..