One afternoon while writing at home, I was feeling a bit nostalgic as I realize that I don’t get to see my sons everyday anymore. Prior to this, you might have read my article entitled How to Prepare for Empty Nest and I sounded just fine.

Yes I am, but that one afternoon, I was a bit sentimental and was missing my bunso (youngest child) who has been away since August. Then the courier arrived with a package. I opened it and voila! It’s my bunso Anton on the cover of FISH, the magazine for teenagers by Kerygma of Shepherd’s Voice. The pictorial happened before he left for his Junior Term Abroad and somehow I haven’t thought about it. 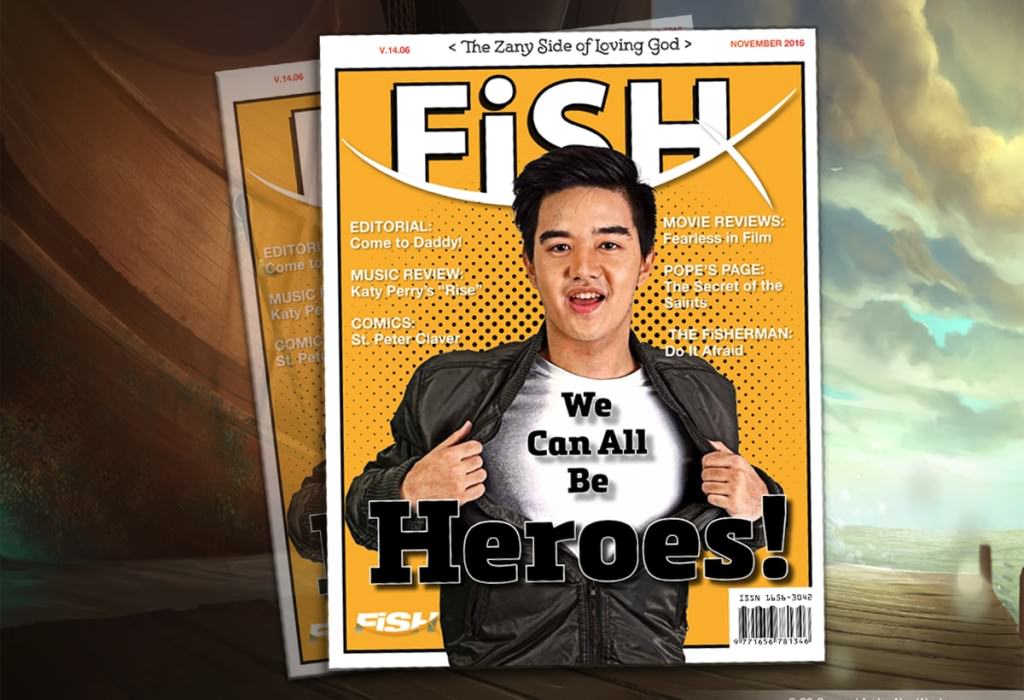 It was a pleasant surprise and made me experience his presence vicariously as I read the article on him.

Here’s the thing about listening to what our children have to say as narrated by other people. We admire them more as we realize what great individuals they have become. We tend to be more forgiving of their past mischief and even remember our difficult times with them as challenges that made us better parents.

It’s always a heartwarming experience when other people talk about their encounters with any of my sons and they tell me good things about them. They usually come when I need them most. That afternoon was no exception.

I was wondering how Anton was coping with his life abroad. Is he trying his best to speak in French now? Is he eating his fruits and vegetables? Does he have good friends in his school by now? Is he enjoying his days away from home? Is he learning important life lessons that will stay with him until he grows old?

Then I read his thoughts in the Fish magazine. The topic was HEROES. Anton believes we can all be heroes. He thinks that heroes are those who stand by what they believe in despite what others think. They are willing to sacrifice for their cause. He also talks about how heroism can come from the most unexpected time, place and person as what happened to St. Ignatius of Loyola, a womanizing soldier who founded the Society of Jesus.  He believes heroes are also human who are not perfect but also make mistakes. 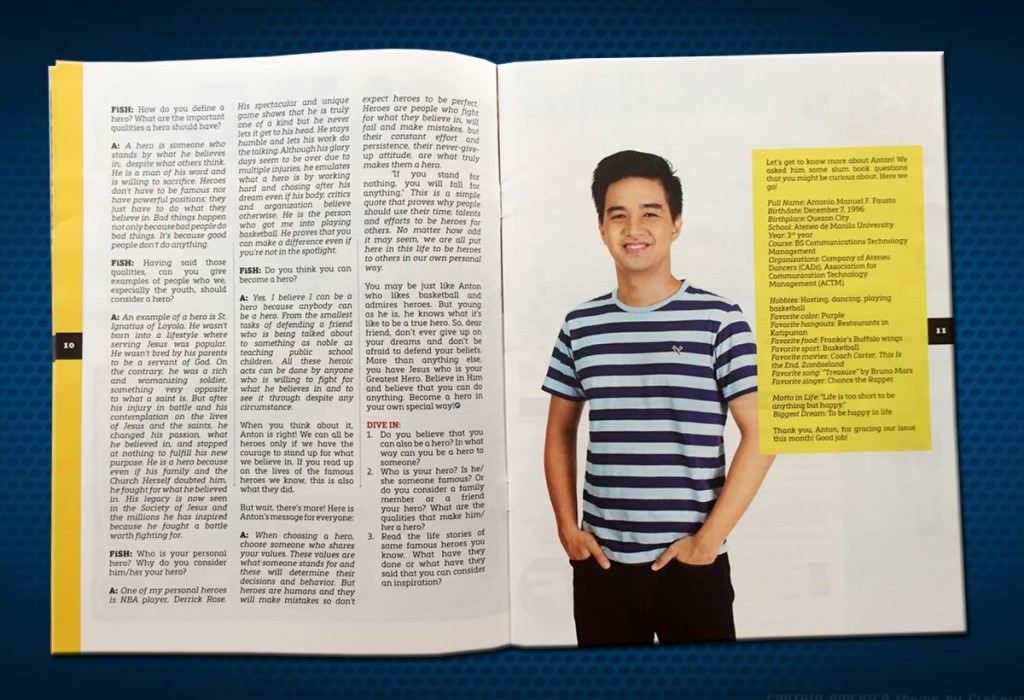 I was smiling while reading the article.

That afternoon memories of my baby rushed to my mind. I recalled how at age seven he asked me if I was disappointed when he came out because we were all praying for a girl. I told him this, “You know you were such a beautiful baby that even if God appeared to me then to say that there was a mistake and our baby was supposed to be a girl, I wouldn’t have traded you for any girl in the world!” It’s true, I fell in love with Anton the moment I saw his chubby cheeks and it was like that baby soap commercial of a mom crying tears of joy for me all over again.

While growing up he was the one I had the most number of conflicts with. He always wanted his own way of doing things, but boy, he was the most malambing (affectionate in a sweet way). He always wanted to sleep with us, required “Read book, read book!” at bedtime and did all sorts of tricks to delay our good night and goodbye when he started sleeping on his own bed. He would always tell me, “Mommy, you’re the prettiest girl in the whole wide world! Next to Mama Mary.” He called us with his invented pet names and always remembered to bring pasalubongs for his older brothers whenever we went out without them. In times of conflicts with playmates, he was ready to defend his older brothers, even if he knew that they were capable of defending themselves. Until now, he would give me a rose or tulip or other kinds of flower to greet me on Valentine’s Day, Mother’s Day and my birthday.

Anton is also very witty and we’re actually missing his wisecracks these days. I remember when he was still in Grade 4 and his father was telling them about the end of a five-year car plan that he availed of from his office. Upon hearing that the car ownership can be transferred to his father if he opts to buy it for a nominal price of P1.00, he immediately said, “Pa, here’s my P1.00, I’m buying you the Trooper! Consider it my gift to you!” Up to this day he would say, I bought this car for my dad! We actually go along with his claim that we even asked for his permission last week when we decided to sell the Trooper!

The need for heroism and the potential dangers

It’s a basic human need to be recognized. When we are acknowledged for our efforts and given importance, we experience self-fulfillment. For some, the mere acknowledgement of their loved ones is enough. A mother who receives the gratitude and love from her children has a happy and content heart. A husband who gets the support of his wife making him feel that he’s a good provider already feels like a hero.

In order to highlight the good deeds, we also give awards and public recognition for heroism. It is when we learn about stories of heroism that we are reminded how great we can become. The heroes become models and inspirations of what we can achieve in our own lives.

Unfortunately, for some, this spotlight and public adulation has become an obsession. Why do you think our country is divided right now? One of the major points of contention is whether to bury a dictator in the hollowed grounds of the Libingan ng mga Bayani.

There are two basic dangers about the adulterated concept of heroism. First, too much focus on the public accolades contaminates the deed. You might just end up doing the heroic act for the sake of vanity; consequently, stripping the deed of the very essence of heroism. Isn’t heroism supposed to be a brave act done for the sake of others? If you’re too focused on the recognition, it ceases to be worthy of being called a heroic act.

The second danger about the misplaced concept of heroism is too much hope being pinned on the perceived hero. Inasmuch as we value freedom, we are a bunch of creatures that needs a leader. In looking for a leader we sometimes tend to think of him as someone who will deliver us from all our problems. Because we perceive him in a godlike manner, we may become too forgiving of his mistakes and gradually allow him to abuse his power. We only have to look at history both in our own land and other countries to see stories of this happening all the time. Is it because we’re too lazy to do the work that we’d rather just hope our chosen leader is the hero who will save us from all our problems?

Back to Anton’s concept of hero

Anton considers NBA player Derrick Rose a hero because the latter never lets his spectacular ability to get to his head. He stays humble. Even now that his glory days may seem to be over due to injuries, he continues to work hard work. He still tries to make a difference even without the spotlight.

When asked if he himself can be a hero, Anton answered, “Yes I believe so, because anybody can be a hero – from the smallest deed of defending a friend who is being talked about, to something as noble as teaching public school children…Heroes are humans who also make mistakes but they have that persistence and can do attitude. We should use our time, talents and efforts to be heroes for others. We are all put in this world to be heroes to others in our own personal way.”

If we could all acquire this simple yet healthy concept of heroism, then our world would be a much better place for all of us. 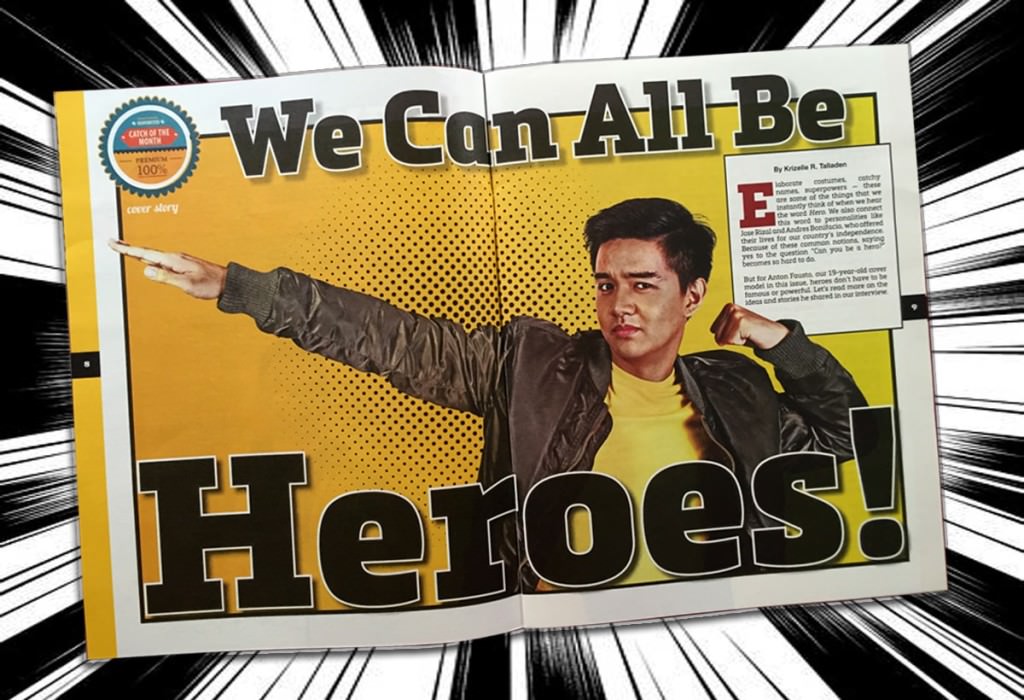 (Fish November 2016 is now out. Grab your copy now for your long weekend reading!)