Thank you very much for your warm reception of yesterday’s Part 1, the “Artikulo Uno” of this two-part series. To those who have not yet read it, please click this link. Let’s continue our discussion on the parenting that Laurena Novicio Luna and Trinidad Famy Aguinaldo might have done on Antonio and Emilio, RaisingPinoyBoys circa 1800s.

4. Paninindigan. I don’t know if there’s a single English word that can express this completely, but it means standing up for something. This is a positive offshoot of confidence. Mommy Luna raised Antonio to have a strong sense of paninindigan that he was not afraid to say the darnedest things. Walang paliguy-ligoy(no beating around the bush). He was so sick and tired of the Filipinos’ lack of nationhood and lambasted his colleagues calling them traitors!

On the other hand, I don’t know if it was a negative offshoot of over protection and the self-preservation skill developed that Aguinaldo could not say it straight to his foe’s face what he really felt. Maybe he thought it would undermine his position. He was always politicking with whoever was in power. In some accounts, he was found siding with the Japanese during the Japanese occupation. Here’s the thing about paninindigan. It cannot be just about the self. Paninindigan is standing up for lofty dreams and values like independence in their case. Maybe the sense of independence Aguinaldo had was overshadowed or muddled up by self-preservation and that’s why he bungled along the way. 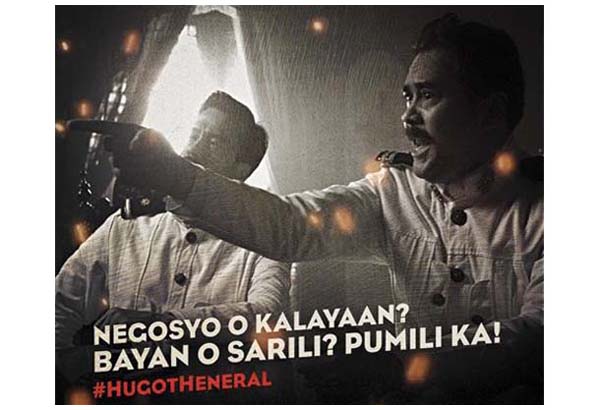 Again, a very important parenting reminder is to raise children with paninindigan. Most of the time, in our usual Pinoy pursuit to be always nice, we end up not wanting to offend anybody; consequently, not standing up for anything. We have to raise our children to stand for up something, otherwise, they would fall for anything.

Take the case of Emilio Aguinaldo. As I mentioned in Part 1, I have always wondered why in my History classes back in the day I never encountered Aguinaldo as a traitor. He was a hero printed on our five peso bill! It’s only recently that his bad acts in the past are coming into the consciousness of the common Filipinos, thanks to the movies Bonifacio: Ang Unang Pangulo and Heneral Luna.

Here are possible reasons why Aguinaldo’s image was kept clean based on what I’ve inferred from my readings:

It is impossible to write history  (or anything for that matter) without biases. Historians are only humans with their own set of circumstances. Facts are always narrated from a perspective. This is the reason why knowing the author is an important component in fully understanding the piece of literature you’re reading.

The descendants of Aguinaldo are probably at a loss right now. All along they (together with a whole bunch of Pinoy History students) thought that their ancestor was a heroic leader worth emulating. I am not discounting the pivotal role that he played in our history but I’m imagining a young grade school boy who comes home crying, “Ma, my classmates said my great great grand lolo was a traitor! Didn’t you tell me he was a hero and that’s why you named me after him? Now my classmates are making fun of me!” In as much as “the sin of the father is not the sin of the son” people can’t help but associate you with your family. So No. 6 above becomes even more important. Our actions today will have consequences not just in our own life but also in our descendants’ lives.

And take note, today everyone is writing history. This is the power of social media. Everyone is free to express his own take on everything. It’s good that we are able to see the facts and the different perspectives immediately that could facilitate productive discussions. It’s also a reminder to be more prudent with our own actions as everything can now be “recorded in history.”

Back to the Moms

Mommy Luna and Mommy Aguinaldo only did what they thought was best for their sons, as we all mommies (and daddies) do. And sometimes we overburden ourselves with guilt if something goes wrong with our kids. It was a comforting piece of information when I heard child psychologist Dr. Honey Carandang say in one of her parenting workshops that parents always feel guilty about their parenting. It’s not necessarily because they are lacking, but because they love their children so much that they always want to make sure that they are giving their best in raising them.

I wish to share with you my take on this. Let’s do our very best to raise our children well but let’s also remind them and ourselves that there’s an expiry date to blaming (or giving credit to) childhood in assessing one’s failures and triumphs in life. At home we came up with the age of 24. At this age, one should take full control of his life. Stop blaming your childhood for your failures and difficulties. On the other hand, you may continue to thank a great childhood if you had one (it’s always better to have an attitude f gratitude) but bear in mind that a great deal of your triumphs are now your efforts.

In the lives of Luna and Aguinaldo, they were 32 and 30, respectively when the assassination happened. Their actions were theirs, probably affected by their partners? As they say, “Your biggest career decision is who you marry.” At that time Luna was single but with a paramour Ysabel Cojuangco, and Aguinaldo was married to his first wife Hilaria Del Rosario Aguinaldo. Oh but that’s another article.

Again, thank you very much for your warm reception of yesterday’s “Artikulo Uno” of this two-part series. Let’s take the lessons from the movie and apply them in choosing our leaders and in raising our children, our country’s future leaders.

Here’s the link to Part 1