Last Sunday fathers took center stage on social media channels, mass and other Sunday services, perhaps even restaurants and a little of gift-shopping. Blessed are those who grew up with good fathers for they benefitted from that all-important presence of the head of the family.

Unfortunately, there is a growing number of children who are growing up with absent fathers due to any of the following:

I will not discuss morality issues in this article. Neither will I denigrate the exemplary achievements of single moms who are able to raise their children well despite the absence of the father. I have loved ones, both family and friends, who are able to. Some might even argue that there seems to be no parenting role that a mother can’t play to raise great kids anymore. Nonetheless, numerous studies show significant disadvantages of not having a father while growing up.

“Tonight, about 40% of children in the western world will go to sleep in homes in which their fathers do not live. Before they reach the age of 18, more than half of our nation’s children are likely to spend at least a significant portion of their childhoods living apart from their fathers. Never before in this country have so many children been voluntarily abandoned by their fathers. Never before have so many children grown up without knowing what it means to have a father. Fatherlessness is the most harmful demographic trend of this generation (underscore mine). It is the leading cause of declining child wellbeing in our society. It is also the engine driving our most urgent social problems (in children and adults alike)…. If this trend continues, fatherlessness is likely to change the shape of our society.”

This is a study in the US but it doesn’t seem any different from our situation. In fact, our OFW phenomenon even adds another cause to the absence of the Pinoy fathers. Instead of discussing from the perspective of the absence, I wish to point out the advantages children derive from having an active father.

For the Sake of the Son:
The most apparent advantage for a son growing up with a father is having a role model for masculinity and manhood  in general. The rough and tumble that boys need are an essential part of growing up. I remember the days when my sons would always ask their father to play rough games with them. I didn’t like the sight because Marvin would literally throw them on the bed and either tickle them hard or throw mild punches while they kicked and punched him back, until somebody gets hurt due to falling or uncontrolled punching. Someone would cry momentarily but after a few seconds they would be back in the game. After getting tired of being a kill joy while they all enjoyed, I stopped watching this routine. I just left the room or got occupied with something else. I usually came back when they needed an ice pack! 🙁 But to this day, rough games are special part of their childhood memories.

There is also a certain way of emotional expression and probably some guy code that only a father can effectively teach his son. There seems to be a more fun paternal way of disciplining a son, despite it being more stern. I saw this while they were growing up. They would respond to their father more quickly when being disciplined probably because they knew his swifter way of delivering the consequences of their action.

A son also responds very well to the modeling of his father when it comes to socialization, academic, athletic and risk-taking endeavors. The approval of the father also has a heavier weight when it comes to a son’s pursuit of excellence and achievement.

In a study quoted by Huffington Post in their article Teen Depression in Girls Linked to Absent Fathers in Early Childhood they found out that girls whose fathers were absent during the first five years of their life were more likely to develop depressive symptoms compared to their male counterparts.

If a son would follow how his father treats women, a daughter would imbibe a lot more from this. When she sees her mother being loved and respected by her father, she will see that as a peg for future relationships. Not only does her father provide a model for an ideal mate, he also affects her self-assessment. A healthy father and daughter bond is essential in the development of a healthy self-worth and self-esteem. The love and attention showered by a father to her daughter while growing up may spell the difference between a self-assured and an insecure adult woman.

So a good father is not only important for a daughter’s future marriage but also for her career and general well-being.

My sisters and I grew up seeing our father play sweetums with our mother. We saw him express his love with simple gifts and songs and declare to the world how smart his wife was. I think that made all four daughters turn into strong-willed women.

For the Sake of the Mother:
Consequently, an active father also makes it easier for the mother to perform her duties not just for the family but also for herself, as she is not alone in this challenging task of parenting. And as they say, “A happy wife is a happy life!” not just for the husband, but for the entire family.

For the Sake of the Son and Daughter:
In last Sunday’s The Feast celebration of Father’s Day held at the PICC, famous layman preacher Bo Sanchez said something powerful about the role of fathers. He said, “Fathers are the first image of who God is!” He said that for a child, his or her father is God’s 2×2 ID photo. If you are a loving father, your child’s image of God is a loving God. Your child’s first understanding of God does not come from priests and preachers, not even the bible, but from the father!

For the sake of the Society:
Given the powerful role that fathers play, and with all the radical changes going on in the dynamics of families, what do you think will happen to our society if we allow the absence of the father to continue its rise?

I am thankful that my sisters, brother and I are blessed with our loving father Rufino who was always present while we were growing up and whose presence we continue to have because of his gift of long life. I am likewise thankful that my three sons enjoyed the active and fun presence of their father Marvin during their growing up years. They continue to be blessed by his loving and positive presence in their lives. As a tribute to their father, my sons Martin, Enrique and Anton performed a dance number for him and all the other fathers in the three Feasts by Bro. Bo Sanchez at the PICC. I wish to share with you the video of their dance and their message to their father.

The series of workshops of Security Bank’s Smart Saver Kiddie Camp continues. Talk 5 will be at the Kiddopreneur at Shangri-la Mall on June 26, 2016. Watch out for the next schedules of this Workshop Series. 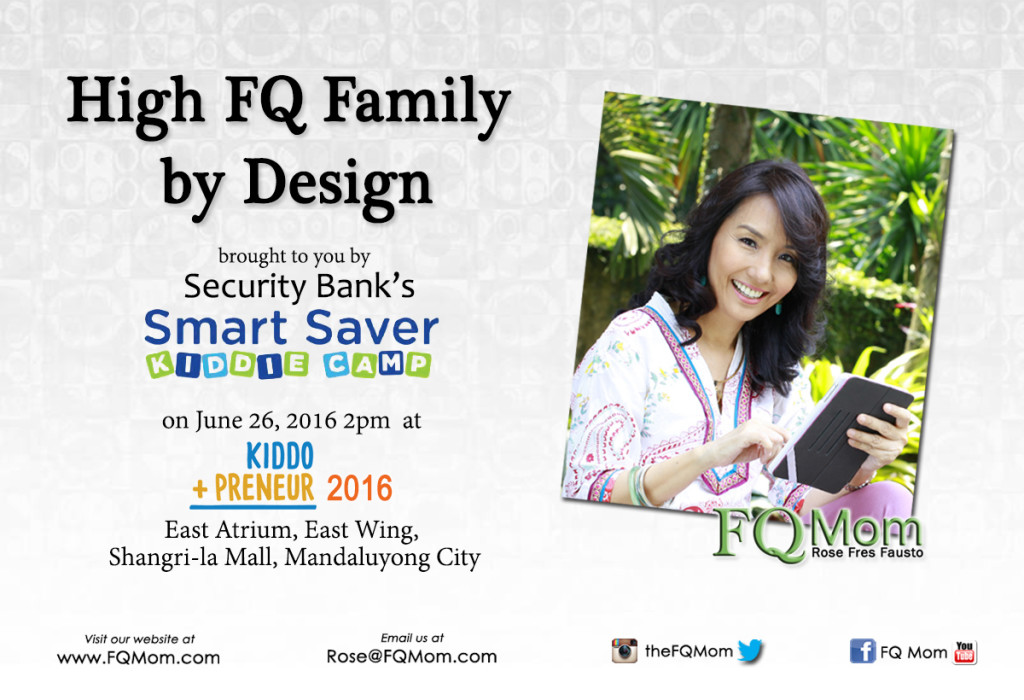 ATTRIBUTIONS: Image from freepik.com to help deliver the message of the article.