Edward Kho Lee is the founder and chairman of the country’s largest online stock brokerage firm, COL Financial, which accounts for over 75% of online value turnover, according to PSE records. He has been in the market for four decades now but still possesses that enthusiasm he had back when he started.

Edward’s enthusiasm about the stock market and teaching financial literacy is contagious. I say he is a teacher at heart. This is not surprising because his mother was a teacher. He always talks about the unconditional love showered to him by his parents back in the day when he was still a happy-go-lucky young boy who didn’t like school. He could very well be our poster boy for those who got kicked out from school and succeeded in life, earning his billions before hitting senior citizenship.

But at this point, he is first to lecture on the importance of education. He is passionate about educating the Filipino people about financial literacy. COL has been conducting investor education seminars for its clients and potential clients over the last several years. He was among the first to receive a copy of my book The Retelling of The Richest Man in Babylon, and soon after he read it, I received a text message from him, “This is a great book! This is it! What I’ve been trying to teach people. It’s exciting that you narrated it in the simplest terms. I’d like to order 200 copies!”

This was even increased as COL decided to give away over a thousand more copies of a special 15th anniversary edition to its clients. He was so excited to give it away to his driver, employees, the children of his friends, even the adults who needed to be reminded about the basic laws of money.

In my encounters with Edward, I would always be laughing at the way he delivers his lines. According to wife, Lydia, he’s the spoiler in the family. I was pleasantly surprised to learn that unlike most parents, they don’t advise their children to delay marriage until after 30. With three kids, Lawrence, Eleanore and Edmund, their score is now 2 down (i.e. married), 1 (youngest) to go and they’re also looking forward to seeing their bunso settle down. They’re now blessed with grandchildren whom they dote on. (So now I understand the reason why.)

I spent an afternoon of happy exchange of views with this doting grandfather and visionary. Watch this: 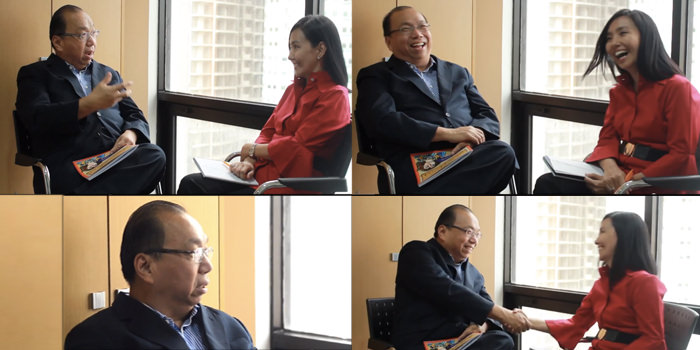 Some of the things we discussed are as follows:

The first time you read the book, what did you think about it?

The biggest problem with a lot of people is that it’s hard for them to understand that Paying Yourself First is one of the most important lessons in life. When we started our business 36 years ago, we employed the ratio: 20% goes to management, 20% goes to shareholders, and 60% is reinvested, taking advantage of the power of compounding. So from a capital of P50,000 each, we grew. I always share this formula in my talks of entrepreneurship.

I’ve read the original book two or three times already but that’s heavier and it’s good that you simplified it that’s why after I read it early this morning, I sent you that text ordering 200 copies!

Would you like to tell us your story about your driver?

Back in 2011 I forced him to start saving and investing. In the first month, he did, then later on I noticed he would miss it and this was due to so many reasons. So what I did was to deduct 100 from his salary every day, which allowed him to save 2,000 per month, then I put in a counterpart contribution of the same amount, doubling his monthly investment.

Then I also told him, “Kung may kita ka na, huwag mo munang gastusin para lumago.” I had to use your third law in the book. It’s a good thing that I can guide him about his investments because I know what’s happening in the market so I can advise him to sell once we reach the target price then he can buy another undervalued stock.

(This reminds me of the movie Sabrina. Remember the chauffer-father of Sabrina who managed to accumulate a million dollars just by listening to his boss do his transactions in the car?)

Can you share with us your childhood money memories?

If you were older and if I read your book, then it would have been easier. The most important thing I remember about my childhood was that I was loved unconditionally. I was a happy-go-lucky only-son and it was difficult for me to finish school, spoiled. But what was critical was that the value was given to us at a very early age, understanding how money works, saving and investing. When I was young, not much money story to talk about.

Who was your Algamish (the mentor in the story)?

Definitely my father. He spent a lot of time with me. He was a salesman. I didn’t like school and he advised me, “Son, you’re not stupid, you just don’t like school, maybe not your cup of tea. If your classmates spend one hour studying and you need to spend three hours, then do it, spend three hours. He never beat me up, even when I got kicked out from school and everything.

Your father’s advice was like the realization of Arkad in the story – that he didn’t stand to have inheritance, he wasn’t particularly intelligent so he knew he had to work doubly hard.

Yes. That’s what I did when I started working. I spent a lot of time at work. Eventually, understanding how the market works, helped me a lot.

So your father planted the seeds of success in you.

Yes that’s why it’s very important to spend a lot of time with your children. My children are now helping me in the business. They’re helping me and helping themselves at the same time as they already have their own responsibilities. They have their own kids now, they should not just wait for inheritance.

How early did you start your children?

Very early. Lawrence, who’s now 32, started when he was 22. Edmund, who’s the youngest, is building up this school, which now just has 12 students. But that’s okay, I’m happy. At least they understand that money is difficult to be made, that it takes time and effort, and as long as you provide the best content and help your students do well, then the miracle of compounding will also happen. Like our business COL, it took a long time to be able to get to where we are now. I’m surprised 15 years na pala kami!

(At some point, only daughter Eleanore also helped in the business. She is busy taking care of her newborn and older child right now.)

At the start, it was more of educating the people, and now you’re reaping the rewards.

I think we still have a long way to go. It’s always the journey, your purpose in life. In our case, it’s to educate as many Filipinos (initially), then maybe, later, the world. We have to love our country, help the people get educated.

What your book is doing is fantastic because it’s really going to the ground level. If they can’t understand it, hindi ko na alam ang gagawin natin! I’m really excited. I also gave away the original book before but if you don’t read that version several times, you may not get it. As in most books, it’s all there, it’s just a matter of when you’re ready to receive.

Your book is a good reminder.

How long have you been in the market?

Over four decades and I consider you as one of the pillars in stock investing in the country. Knowing what you know now, if they ask you, “Edward, can you try to help us solve the poverty problem in the country?” what would be your top three priorities?

(Sighs) I think I’ll just follow your book! (Laughs) Laws 1, 2 and 3! I think this is really exciting. It says it as it is. Hard work is always there, but if they’re not financially literate, they will be working all their life. The sad part about this, and I think you have to remind people who are doing well, that they too have to read this book. A lot of people do very well but don’t have the mindset of investing. So after a while, when they grow old, they’d say, “Oh my God what happened to me? I earned a lot and never got to understand the laws of money.

When they retire, they put their money in an investment they think they know but don’t (which is Law No. 2) and that’s dangerous. The worse is having money and not knowing where to put it. And when they’re old and broke, they’d depend on their children. But what if they won’t be there? We work with a lot of abandoned elders – people who used to be principals, teachers, etc.

Just a while ago, I was talking to the head banquet manager in the restaurant where we had lunch. She’s going to Indonesia and I taught her how to invest using your three basic laws. She wanted to come over and open an account right away. I said, “No need, just download the form and apply online. It’s really simple. Congratulations on this book.”

Thank you very much, do you have any parting words?

The most important thing in life is Family. Love your children unconditionally because I’m a product of that. Teach your children the importance of values. And of course, know how to invest.

As usual, I always learn something from a chat with Edward Lee. Not only about the market, but about life in general, because he is always willing to teach. Indeed, the broker is a teacher!

(Rose Fres Fausto is the author of bestselling books Raising Pinoy Boys (download free book sample) and The Retelling of The Richest Man in Babylon (a story and activity book for kids from 1 to 92). Click this link to watch the new and exciting Book Trailer.

To read her other articles go to Author Archive of PhilStar.com, FQMom.com and RaisingPinoyBoys.com. Send your questions and comments via email to FQMomm@gmail.com. To watch other interviews go to Videos or FQ Mom you tube channel.)

This article is also published in PhilStar.com and FQMom.com.