I first saw Riza Mantaring when she was being interviewed on ANC as the new Chief Executive Officer of Sun Life Financial Philippines. At that time, her company was already among the country’s top insurance companies but not yet the number one. She struck me as a humble top honcho as she narrated how she didn’t expect to land that position. It was not usual for an IT person to land the CEO spot. She was not the typical aggressive looking lady executive who had to downplay femininity in order to break the glass ceiling. There was something in the tone of her almost sing-song voice that’s very calm and assuring. My admiration for her escalated when I found out that she’s a marathon runner, and I mean the whole 42 kilometers! I know the discipline that gets into this because my husband does this too and I tell you it is big.

Later on Sun Life forged its way to become the number one insurance company in the country. I wasn’t surprised given all their effective advertising campaigns, some with Papa Piolo. Then I also met the other female executives of Sun Life – Mylene Lopa (Chief Marketing Officer) and Riena Pama (President of their Asset Management company) who happens to be my college batchmate. I realized that part of their magic sauce is their ability to embrace their femininity and make it work to their benefit. But that’s a whole new topic worth discussing in a future article.

One rainy afternoon I visited Riza in her home to shoot her video reading Chapter 8 of The Retelling of The Richest Man in Babylon. (Click link to watch.) She had a very nice reading voice that I had to ask, “Were you always your school’s candidate in declamation contests?” I was right, she was. She was kind enough to allow me to interview her and this was in between getting ready for a trip abroad.

Among the things that we discussed are the following:

We had a very simple childhood. We weren’t wealthy by any means but comfortable. My dad always emphasized this, “Don’t spend what you don’t have, don’t buy what you don’t need.” That’s how we were. He kept away from loans. But there were some things that were important to him – tools like calculator and he bought the best calculators for us – the HP-67, Reverse Polish Notation, it’s so geeky!

Riza is the Ate, the oldest among a brood of five. They were also given regular allowance, which she augmented by working as a student assistant.

We had our allowance but our parents made sure we never had too much. Since I had my income as a student assistant and also had a scholarship, they reduced my allowance because they didn’t want us to get used to having too much money.

But what I admire in my parents is that they prepared really well for their future. I realize that now. When we were younger we felt like they were scrimping too much. I wish I had more of this, more of that. But now I realize the importance of what they did. When they got older and became sick (my dad had cancer), they were fully prepared. They handled their hospital bills and all their expenses, no need to burden their children, no need to borrow money. When he passed away, he left quite a sum for my mom who’s now sick. (Riza’s mother passed away recently.) That’s the lesson I really learned from them. Make sure you are prepared. Don’t burden anyone, especially your children because they have their own lives to live.

I asked Riza to please share with us how smart all her three children are. With a bit of hesitation she enumerated their credentials:

We’re fortunate that they grew up quite well and what I’m really proud of is that they’re good kids.

At this point I said, “That’s why I really want to ask you, how did you do it? How were you able to balance your time between your career and family?

To that she promptly and honestly answered, “You can’t!” Then she went on to explain.

You really can’t. You just have to decide what’s important to you, what your priorities are. I always made sure that the kids and family came first. My husband and I took turns in taking time off to be with our children like school activities, competitions abroad.

The hardest part was when they were young. My daughter used to cry like anything every time she’d see us go out for work. Later on we got into a routine wherein she would ride the car with us until the end of the driveway, then we’d say, “OK you can go down now.” And she was fine with that because she also realized that we always came home.

Saving came early among the Mantaring kids from their daily, then weekly allowance. One funny story was when my son was in rage and he threw his shoe out of the van while it was moving. So wala na syang sneakers for school and we didn’t buy him a new pair. He had to look for, and use an old pair from his older brother. After a while the shoes were cracking up and water would seep in. We only bought him a new pair after the semester. But he learned his lesson. He never threw his shoes anymore!

Saving was quite automatic because I would deposit their allowance in their savings accounts. They had to withdraw the money if they needed it. Then investing came in when I told them that their money didn’t earn anything in their savings accounts. I gave them prospectuses of our mutual funds and asked them to study the funds. They have been investing in mutual funds since high school.

My youngest is the most aggressive as he puts most of his money in equity funds. One time he lost his cellphone and wanted to buy a replacement. He asked me to withdraw from his investments. But when I showed him how much his money had grown, he was delighted with the earnings that he didn’t want to withdraw his money anymore. He just resorted to using hand-me-down phones until the screen was not readable and the keypad completely worn out.

My daughter who’s now working really took to heart the lesson of peso cost averaging. She sends me an amount every month, which I’m supposed to invest. One time the market was so high that I held on to her money waiting for the market to go down. But the market just continued to climb. When she checked on me and found out that I hadn’t been investing her cash, she said, “Ma, you told me not to time the market, just put it in!”

With grown up kids, Riza and husband Chicho are empty-nesting. That’s why they really see to it that they travel together at least twice a year.

With that we ended our conversation. I was happy to have peaked into the life of Riza, a successful CEO, mother and wife. Maybe her being a self-confessed geek is key to all this. She’s able to put a system in place and make it work, be it in getting to be number one, raising super smart kids, running a marathon. I guess her father’s investment in that geeky HP-67 calculator using Reverse Polish Notation was also instrumental in putting order and helping Riza succeed in the many facets of her life!

Watch the interview by clicking the link below or above the article: 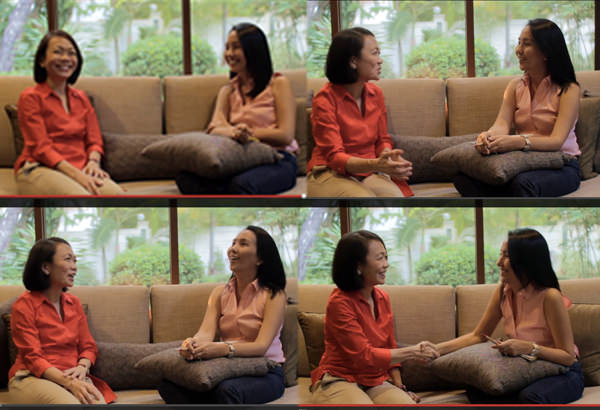 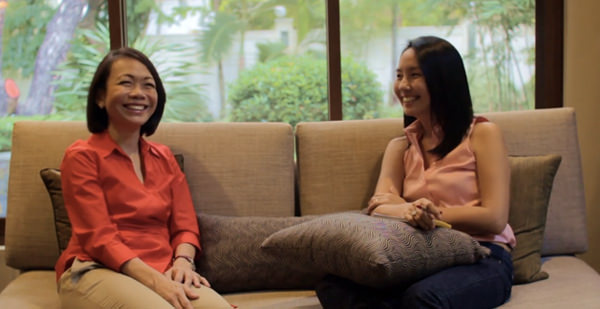 This article is also published in RaisingPinoyBoys.com and PhilStar.com.

Ep. 35: Transition from Kuripot to FQripot | Money Lessons with FQMom and Sons

How Do You Make Your Financial Decisions? (Meet Makatwirang Mak and Emotional Emong)

What is something really expensive you spent on that made you feel on top of the world?