The Prospects:
The two international issues that are being talked about that could affect the Philippine economy are the Grexit (Greece’s debilitating debt problem that may cause them to exit from the Eurozone) and the China Crisis (not the English pop band of the 80s who sang Wishful Thinking but the economic slowdown in the second largest economy of the world).

On the local front, we felt a slight market reaction to the low first quarter GDP at 5.2% that disappointed some sectors because it was lower than consensus projection.

Despite the above, the speakers said that the prospects remain positive for the Philippines (Luz projects the annual GDP growth at 6.4%) primarily because of the following points:
1. Our inflation still remains at its lowest historical level.
2. Despite all the anticipations on FED’s action to increase interest rates, our strong banking sector and a private sector that’s not highly leveraged give us the security that liquidity will remain high.
3. Our current account surplus is expected to remain at comfortable levels because, unlike our other Asian neighbors who are affected by the decline in prices of commodities, our main source of foreign exchange are stable – i.e. OFW remittances and BPOs. (It’s interesting to note that BPO contribution, now standing at PhP18 billion, may soon catch up and even surpass the OFW remittances of PhP24 billion in two years.)
4. The basis of the Philippine growth story remains intact (the demographic dividend, the K-12 education system expected to enhance skills of the young population, consistent economic policies across administrations, etc.)

“Our Survey Says”
I always attend Sun Life conferences because I am interested to know the survey results that their firm regularly conducts in cooperation with the SWS (Social Weather Stations). I believe in the importance of surveys. It’s good to know what people think and feel, and it’s good to know the data in a timely manner because emotions change quickly. There are certain parameters and guidelines as to how we should use survey results because people don’t always act the way they thought they would when asked during a “cold state.” For most of the time, they act differently when in the “hot state.” (These hot and cold states are Behavioral Economics concepts but I will not discuss them here. You may check my B.E. articles in FQMom.com for more of this topic.) 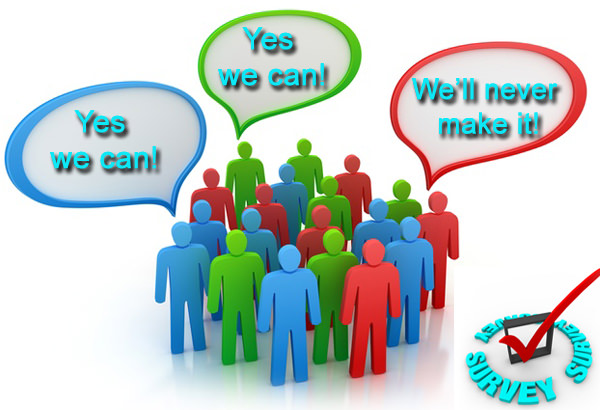 Sun Life Financial Philippines President and CEO Riza Mantaring and Chief Marketing Officer Mylene Lopa also spoke at the event informing us of the increased awareness in financial literacy among Filipinos, a drive their institution pioneered in 2009. They reported that over 25,000 Filipinos have attended their free events, and internet searches on the topic “investing in Philippines” has increased by a significant 77% in recent times.

In their last survey conducted in March 2015, they asked Filipino respondents about prospects in the country. Here are the interesting findings:

5. What are you doing to improve your own financial situation?
54% – saving money
19% – growing current business
18% – NOTHING!

The last two questions are quite revealing and disturbing, and somewhat connected. The significant 26% believes that even with a developed Philippines, it’s going to be the same. Their family’s welfare will not improve probably because they feel that they’re way way down there that nothing will trickle down to them. Or they could just belong to the MegaNega or Negatron population.

I’m sure all of us have our own share of these people among our family and friends, right? And they’re not necessarily poor, just Nega! You show them the impressive GDP growth rates of 6.1%, 7.2%, 6.8%, the fastest in ASEAN for the last three years and they have a rebuttal. You remind them that in the Martial Law years parents would admonish their makibaka children for criticizing the administration because they didn’t want them to end up being arrested, tortured and killed just like the children of some people they knew (think Dekada ’70), but they still curse the lack of freedom in the country. They criticize the administration like crazy and you ask them whom they voted for, and you find out they didn’t even vote. I always say, “You don’t have the right to complain about the government if you don’t even exercise your right (and to me, also an obligation) to vote!” Oh my! If these people could just read history books and find out how the minority populations, and even the women fought for their right to suffrage.

If you have people who are dear to you who belong to this category, it’s okay to say your piece, then drop it. Negative vibes are sometimes contagious and dangerous to health, so if you can avoid them, do so.

Now this hopelessness may be the main reason why in the last question, 18% is doing nothing at all to improve their current financial situation! This to me is the saddest. Hopelessness is the worst disposition one can ever have. I’ll take anger anytime over hopelessness. Hopelessness stifles, it kills happiness, it kills life. In fact, it’s the reason why people, young and old, resort to suicide.

Personal Accountability
What I’d like to point out here is the importance of accountability. As what Mylene, the CMO said, “Financial freedom can only be achieved if each of us would take personal accountability for our finances and take specific actions today.” There is no other way. Stop blaming the government, your being born poor, the Greek crisis, the China crisis or whatever crisis, your spouse, or anything that you can pass the blame on. You can either look for excuses or start doing something now.

Now is the time to start your financial journey on the right track, if you haven’t yet. In 2015 we enter the demographic sweet spot – i.e. the majority of our population is in the productive years. Countries who entered this phase enjoyed unprecedented growth rates for decades. So invest now, forget timing the market – that’s just for the trading experts – who, I honestly feel, I can just count with my fingers. Just invest regularly, and if possible, automatically. Take out the emotional (usually irrational part of you) which will make you buy high and sell low, the exact opposite of what you’re supposed to do to make money in stocks.

Make it a family affair. In your own capacity, influence your family members to be positive people. This way they will become positive contributors to our nation. So in your next Sunday lunch with your family, ask yourself and each one of them, “Do we want the Philippines to be a great country? How do you think we can help? By being an Optim or a Negatron?”

Photo Attribution:  Images from Colorado.gov and word44arlene.files.wordpress.com modified by the author to help deliver the message of the article.