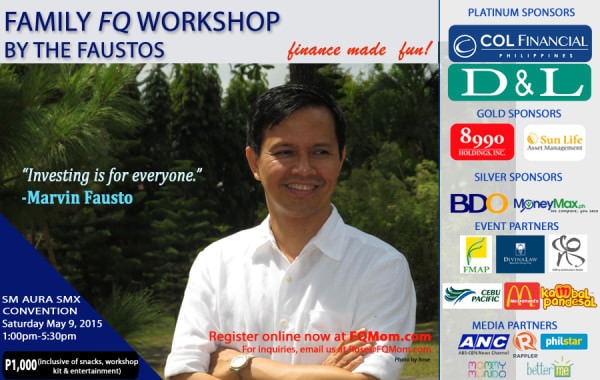 And now it’s Marvin’s turn to invite you. The Honey graduated from ADMU in 1983 with a degree in Management Engineering. Soon after, he worked at Far East Bank & Trust Co., and that’s where we met. 🙂

Marvin will talk about how he leads our family on May 9. I’ve always been very thankful that he actively participated in bringing up our sons despite being busy with work. He is the founding president of the Fund Managers Association of the Philippines, and currently sits as its Board Adviser. He’s also a Board Adviser of the CFA Society Philippines and the Trust Officers Association of the Philippines (TOAP), the latter where he was once held the position of president. He was a Governor for several years in the Market Governance Board representing investors at the Philippine Fixed Income Exchange.

On different occasions, he participated as industry resource representative in the Philippine Stock Exchange’s Maharlika Board, the Senate and Congress for various technical working committees to craft laws and implementing rules on the PERA Bill, the Collective Investments Bill, REITs law, and various rules on capital markets with the Central Bank, Securities & Exchange Commission such as ETFs and Funds Passporting, and the Insurance Commission for the pre-need industry.

His various involvements stated above were brought about by his three decades of experience in the finance industry – from credit analysis to managing the country’s largest trust fund.

When people ask him why he retired early, his answer is, “I retired from a ‘dream job’ in order to pursue a ‘bigger dream!’” And that bigger dream is to help democratize investing. He believes that “Investing is for everyone!” and that’s the goal of the project he’s doing with COL Financial right now – i.e. to make all mutual funds easily available to everyone in one platform with simple and easy to understand guidance.

Oftentimes, he would explain investing as similar to one of his passions – i.e. running. Do you know that his favorite superhero is The Flash? He has run local and international marathons such as the New York City and the Tokyo marathons.

Listen to him on May 9 share his views on the economy, investing and leading a family. Click link.