On March 11, 2015 I’ll be speaking at the annual event of PIFA. Nope PIFA doesn’t stand for some Football Association (Philippine Islands Football Association?). It’s the Philippine Investment Funds Association, an association of mutual fund companies in the Philippines composed of 53 fund members being managed by 10 fund managers. It aims to foster the growth of the Philippine Mutual Fund industry and protect the interest of the investing public. It is now headed by Philipp Hagedorn as the president while Riena Pama is listed as Chairman in their website www.PIFA.com.ph.

Abridged History of Mutual Funds in the Philippines

As narrated in the PIFa website, the mutual fund history in the Philippines started in the early 1950s brought about by the popularity of offshore funds worldwide. In the absence of governing laws then, the companies were registered as finance companies. Some capitalized on long-term investment programs, which made their investors commit to a fixed payment scheme (Php 50 per month for a period of 20 years). The initial amount invested for the first year served as the commission, thus, forcing investors to make successive payments thereafter before they would be able to break-even, much more so, realize a profit. Some of these companies charged exorbitant sales charges of 8%. A fund even charged a front-end load of 50%!

Wow! Can you imagine that happening now? Well, the good news is, my husband’s project to provide the platform that offers the country’s mutual funds via the COL Fund Source (the country’s first fund supermarket) will do away with these front-end charges! And this is coming out soon!

Back to the MF history, the stock market collapsed in the 1950s and three of the four companies operating as mutual funds closed shop. As a reaction to this, the government enacted R.A. 2629 the Investment Company Act with very stringent measures, which consequently hampered the development of the industry in general.

In ‘70s with the worsening economy, 30% dive in the stock market, absence of alternative investment vehicles, the remaining three mutual funds fell flat. In 1973 the SEC totally banned the sale of mutual funds.

It was only in the late 1980s when the ADB initiated a study on reviving the mutual funds. Learning from past lessons, some safeguards were included in the implementing rules and regulations. The first company to register, Galleon Fund, sponsored by Arthur Sakolow, started selling its shares on February 1, 1991.

Start with the Why

My talk topic at PIFA today is Investment 101 for Families & First Time Investors. As the other speakers will already handle the specifics of the fixed and equity investments, I will discuss more about the mindset, the basics. I will start with the Why. If you haven’t read that powerful book by Simon Sinek entitled Start with the Why, I suggest you do. Or at the very least, watch his Ted talk on this topic. (Click this link to watch.) 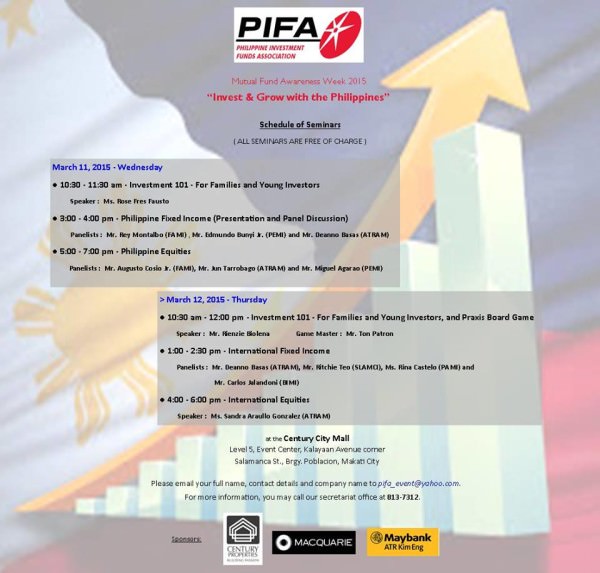 Above is the schedule of talks. For my part, I plan to share the experiences of our household helpers. You see, our helpers at home are investors. And thank God for pooled funds, they too can invest in these paper assets even with low monthly contribution from their salaries.

I admit, it wasn’t easy for me to convince them to do this regularly. For those with household helpers, you know what I mean when I say deaths, accidents and other cash needs are always coming their way through text messages. And if we wait for all those to be paid for before they start saving, chances are, they will never start. So every time I hire a helper I always include this mini Investment 101 session informing him/her about the importance of investing. I would always have to find out their circumstances, so that I could make them articulate their own whys and make it easier for them to do that sacrifice and discipline of always setting aside something for investment.

Our family mantra is Investing is for everyone! This is best exemplified by our helpers’ regular investing. You see, I don’t only try to raise children with high FQ but also helpers with high FQ! 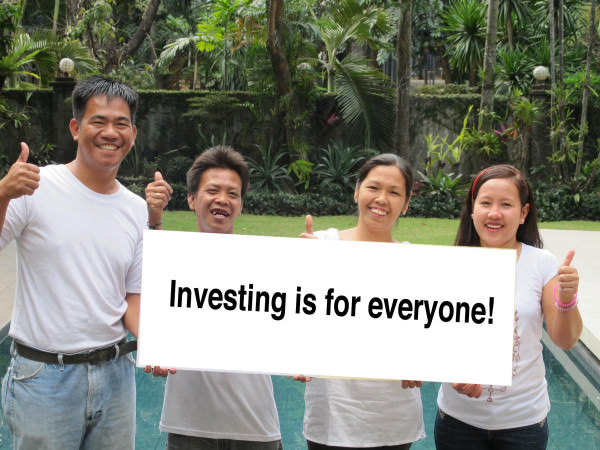 Let’s meet them one by one: 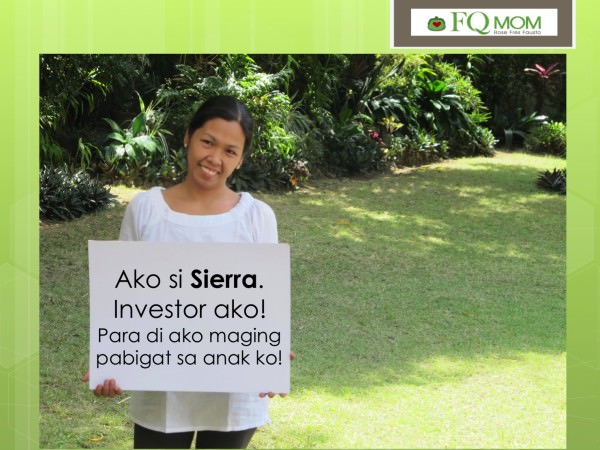 This is Sierra. She was the yaya of Martin, our first born, when he was only 1 year old. She stayed with us for a few years then left, got married, had a child, separated, then came back to us in 2007. During all her years of service to us, we have gotten to know each other very well. She’s the oldest daughter, the typical Ate in a brood of 5. She acts as the first-born in their family and would always carry the burden of whatever was needed by her parents, her older brother, her younger siblings, sometimes even other relatives. Thus, it was hard for her to save. At times, I would admonish her, “Sierra, bakit ba ang drama mo sa buhay e ‘Pasan ko ang daigdig?’ Puede ba, kumita na yan na pelikula ni Ate Sharon noong araw!” It took me a long time to explain to her that sometimes she should allow her other siblings do their own share. Then when she realized that she didn’t want her son to eventually experience what she was experiencing with her parents (i.e. always fending for their needs, sometimes even vices), she decided that yes, she should start investing for her own old age. She found her why.

This is Jenny Fe. She came to us in 2007 as a very young girl, only 17 years old. In 2008 she was going to turn 18 and we were quite thrilled to be throwing her a party, some sort of a simple debut (that’s what happens when you don’t have a daughter). And then she eloped with someone! We were hurt and very disappointed with her decision. Of course, the mandatory next chapters happened in her life – she got pregnant, gave birth, had problems with the husband. And now she’s back with us. She is investing for her mini-me, Jay-Anne who is turning 6 this month. That’s her compelling reason to invest. 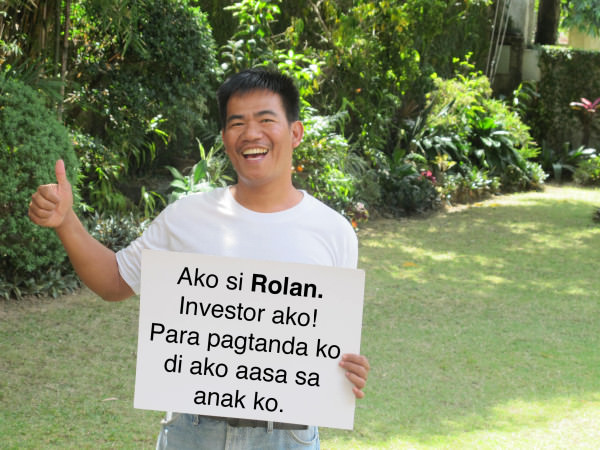 Meet Rolan. His math IQ is far higher than his IQ in directions, which is really a challenge when he drives for me because it’s a case of the blind leading the blind. But he’s very good when it comes to computing how much change he’s supposed to give the book buyers during my talk. He told me Math was his favorite subject. He’s also good around the house and loves to explain things. His compelling reason why he invests is that he wants his children to be free to do what they want to do with their own money when they start earning and not to worry about their parents. He wants to be a financially free retiree. 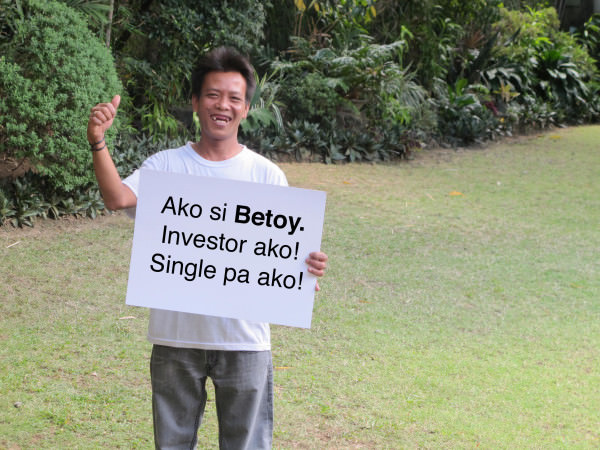 And the latest addition to our household staff is Alberto Alcantara (doesn’t that sound like a name of a bank president to you?) a.k.a. Betoy. He’s the youngest sibling of my long-time helper Sierra. Last year we decided to give him regular employment here at home tending our garden and helping out in the other household chores. He’s still a little boy at heart but he’s quite aggressive in his saving and investing for he has the highest Pay yourself first rate! 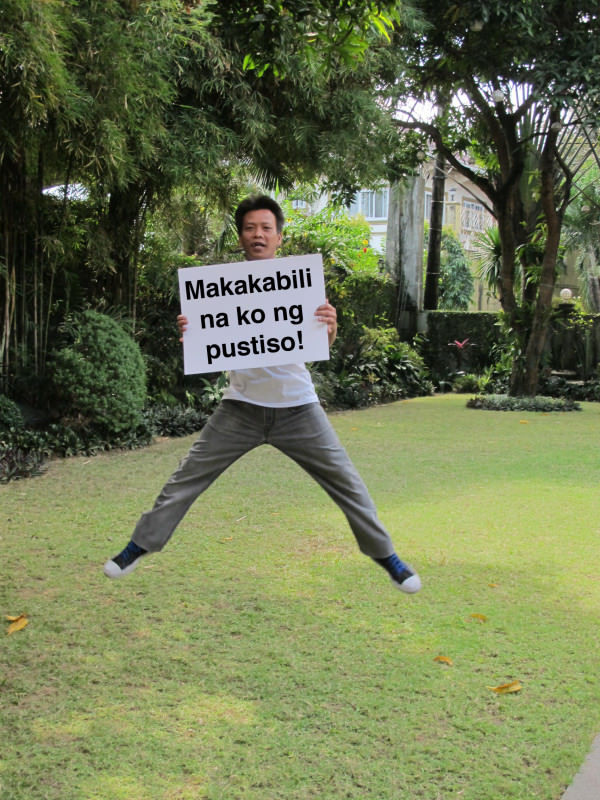 So there you go, our household staff, who are proud investors in pooled funds. They really exemplify our family mantra: Investing is for everyone! 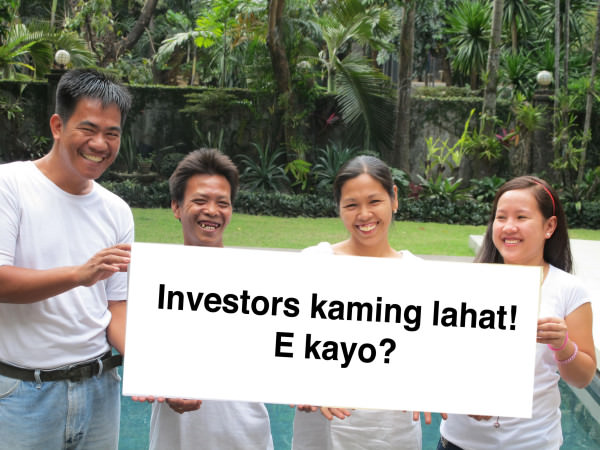 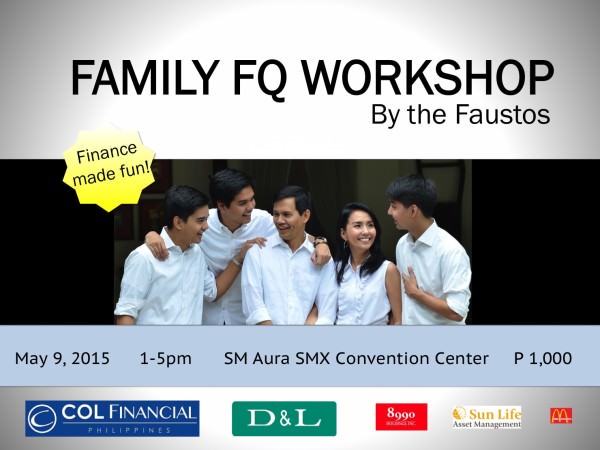 This article is also published in PhilStar.com and RaisingPinoyBoys.com