On February 2 I gave a talk at the Ateneo Business School in Rockwell on guidelines in choosing our next president. It was a bit of a challenge for me because I am not a political analyst, I’m a mom!

It just happens that I also have some strong views on how we should choose our next leader.  But you see, moms and dads and all Filipinos should really get involved in actively choosing our next leaders. Among my pet peeves are people who always complain about what’s wrong with our country and yet don’t even bother to vote during elections.

It all started when I wrote a series on the presidentiables late last year that evolved into an ebook (click to download ebook). It was well received and so there I was, talking about something outside of parenting, financial literacy and womanhood. Exciting times indeed! 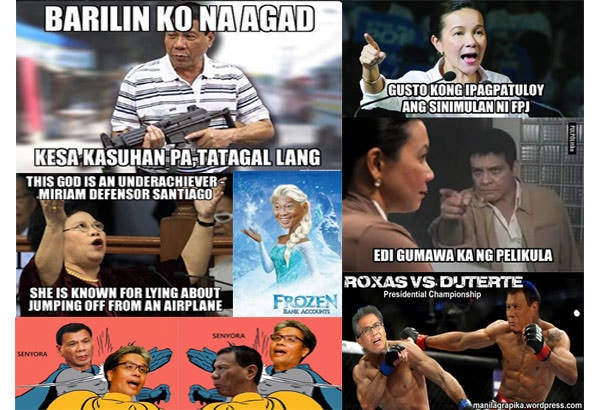 …chances are you will just get confused and emotional and unable to make a good rational decision. If you are outspoken and stubborn, you might even get embroiled into the frenzy of sampalan, suntukan, siraan, etc., that are prevalent now, things that we always remind our children not to do!

So what’s good about our country now? I’m borrowing this pictograph from COL Financial which gave its briefing recently and pointed out the following positive things about the Philippines. 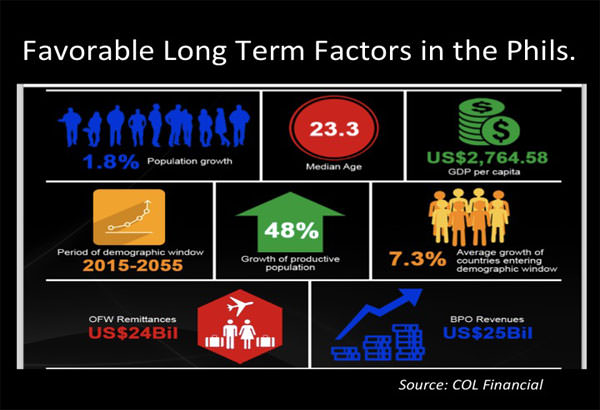 Let me walk you through the above symbols and numbers. Our population is growing at a rate of 1.8% with median age at a young 23.3 years. In 2015 we entered the Demographic Sweet Spot, the period when majority of our population is in the productive stage (time when they contribute most to the economy). This is expected to last until 2055. Imagine our productive population growing by 48%? This translates to increased economic productivity. The GDP per capita (gross domestic product per person) now at US$2,764.58 is expected to increase and when we reach the U$3,000 mark, probably in the next couple of years, personal consumption elevates to higher levels, further spurring economic growth. 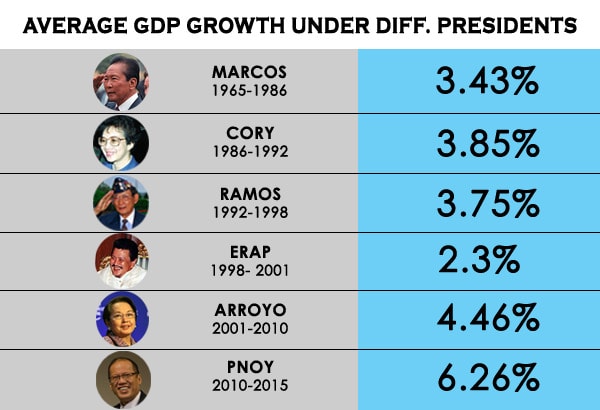 We still hear a lot of complaints that nothing good is happening in our country. Sure there’s a lot of room for improvement (we’re all paralyzed by our epic traffic) but check out the growth rates above. From a low of 3.43% we are now on record high of 6.26%. If you refuse to accept the improvement, then start looking for another country to host you.

Our star contributor to GDP, OFW remittances which was US$24 billion in 2014, seems to be reaching a plateau, but thanks to our BPO revenues, it is poised to replace the former, estimated at U$25 billion this year, and expected to grow further.

Now what kind of regime is best to make sure that we will reap the rewards of the demographic window and grow at an average of 7.3%? This high growth rate was the average of the countries that experienced this demographic window in the past and have now reached developed status. If we don’t miss this opportunity, we will also get there!

Take a moment and write down at least three things that you want your country to be.

Personally, I want our country to reap the rewards of our demographic sweet spot. I want a more orderly implementation of laws (traffic, cleanliness of surroundings, doing business, etc.). I want to narrow down the gap of the rich and poor.

Before I tell you the next one, here’s a not so gentle reminder: We are all stakeholders of our country. Our country is not just as good as the leaders that we elect (as what a lot of whiners want to believe). Our country is as good as each Juan and Juana, as good as what you and I, contribute. Kung bulok ang tingin mo sa bayan mo, marahil bulok ka rin kasi! (If you perceive your country to be rotten, maybe it’s because you are also rotten!)

So the next question that we should all ask ourselves is this: Given my talents and skills, how can I contribute to make Dream Philippines a reality? So take a moment again to write down at least three things that you can do to make your dream come true. Maybe we should suggest to the next president to make it a nationwide event that during the SONA (State of the Nation Address) we should also bring out our own score cards and rate ourselves how well (or otherwise) we have performed in the past year to inculcate that we are all in this together. We are all stakeholders.

Believe it or not, we can all contribute to the development of our country. For parents, it’s making sure that they raise their children well to be good, productive citizens of the country, who follow rules whether someone is looking or not. For fellow financial literacy advocates, let’s push it further to make sure that the literacy translates to improvement in the actual financial condition. For everyone else, teach and help people within your circle of influence the skills that you know well so you can help bridge the gap of the rich and poor.

Guideline Question No. 3: Who among the candidates can lead me best?

Now that you have a clearer idea of the Philippines that you want to help create, figure out what kind of leader can help you make this happen. You can now focus and look beyond the gimmicks, the mudslinging and election clutter because you now know what you are looking for. What traits of a good leader am I looking for? Who can help me bring out the best in me? Yes, just focus on who can lead YOU well. Do not be pre-occupied trying to second guess the masa vote, the middle class vote or the elite vote. Just think of who can lead you best. Anyway, you do not have control of what the others will decide and do. You only have control over your own decision and action.

Hopefully, you are looking for someone with integrity, competence, and someone who has the energy and can empower you, so you can give your contribution to your Dream Philippines.

It’s very similar to the guiding principle of Warren Buffet and that is why he is the greatest investor. He said, “Somebody once said that in looking for people to hire, you look for three qualities: integrity, intelligence, and energy. And if you don’t have the first, the other two will kill you. You think about it; it’s true. If you hire somebody without the first [integrity], you really want him to be dumb and lazy.”

Even a regular mom when hiring a household helper would say, “I want someone who is trustworthy, smart enough not to mess up my kids’ vitamins and who has the energy to work around the house. Even if she has the last two, if I can’t trust her, if she does short-cuts, then my family is in trouble.”

Go on with your research now.

With just three months to go before the elections, let’s carve out some time to study our choices. Who has the three most important traits (or any other traits you feel are important to you)?

INTEGRITY: How was he/she raised by his/her parents? Are they honest and could have passed on that trait to their child? Can I count on him/her to implement the laws fairly? Does he/she have obvious sources of conflict of interest? If he/she has, can he/she eliminate such conflicts? Does he/she have a record of graft and corruption? Who are the people around him/her? His/her family, friends, allies? Who is his/her VP running mate?

COMPETENCE: What is his/her educational background? Is he/she smart enough to run a country? What does he/she have to show in terms of work portfolio? How has he/she done in these past stints, whether in government or private sector? Will I be represented well by him/her in international negotiations? What good has he/she done for my country so far?

ENERGY & ABILITY TO EMPOWER: Does he/she inspire me to do my best to work well in my field so that I can contribute to our country? Does he/she have the right health condition and stamina, not just to withstand but, to flourish in the grueling tasks of being the most powerful person in the Philippines with all its problems and high expectations?

And remember what Warren Buffet and the mom said, “Even if he/she has the last two, if the first is missing, we’re dead!”

I hope the above guidelines will help you in choosing our next president three months from now. And while we’re at it, remember that the Vice President is just a breath away from the presidency; hence, should be subjected to the same guidelines. 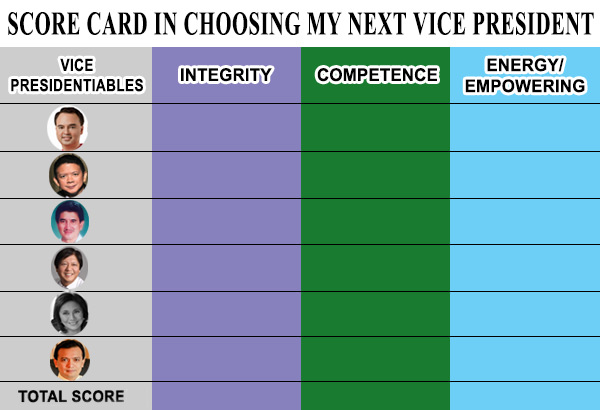 Again, we are all stakeholders in the Philippines. Let’s continue the conversation. Avoid starting off with the personalities because if we do, we end up being defensive, closed-minded and combative. Chances are, we generally want the same things for our country. Let’s focus on the process. Use the guidelines: 1.) What is my Dream Philippines? 2.) What can I do to make it happen? 3.) Who can lead me best to make this happen? Let’s use this privilege and responsibility on May 9 wisely. Remember, #MahirapMagMoveOn from the ills of a bad presidency!

Money and Family Summit (A Gift From FQ Mom)