I discovered and started studying about Behavioral Economics (B.E.) in 2010 and later on started to write about it in my column and website, and discuss it in my talks. Among the first books that I read about B.E. and continue to re-read is Nudge (Improving Decisions About Health, Wealth and Happiness) written by the Father of Behavioral Economics Richard Thaler and his friend Harvard law professor Cass Sunstein.

I wrote to Mr. Thaler and was thrilled to receive his reply. (That is why I also see to it that I reply to the letters/messages I receive from my readers. 🙂 If you don’t receive my reply, chances are, I didn’t get them.) In 2012 when my husband Marvin first attempted to run the New York City Marathon, I decided to write to Richard Thaler for a possible meet up. This was his reply: “I may be in New York at that time. Unfortunately, it might not work because the marathon is shortly before election day and all of us involved in the Obama campaign will be busy worrying full time!” The NYC marathon was cancelled while we were already there, due to the massive damage caused by Storm Sandy. The registered runners ran anyway, at the Central Park. The elections went on smoothly and Obama was given his second term.

Fast forward to 2016 when Marvin was invited to be one of the judges at the CFA (Chartered Financial Analyst) Society’s IRC (Institute Research Challenge) to be held in Chicago. When he asked me if I wanted to join him, I thought of getting in touch with Mr. Thaler once again, who happens to be a professor at the University of Chicago Booth School of Business.

And so once again, I wrote to him asking for a meeting as early as January 2016 with fingers crossed. I had to remind him of our almost meeting in 2012 and jokingly said, “I know you might even be busier now, what with your new status as a “Hollywood personality” acting with no less than the teen sensation Selena Gomez in The Big Short!” If you saw that movie which narrates what happened in the financial crisis in 2007-2008 whose damage can still be felt up to now, Richard Thaler appeared as himself – the Father of Behavioral Economics – in a casino scene together with Selena Gomez to explain Synthetic Collateralized Debt Obligations (CDOs).

According to Investopedia, Synthetic CDOs are instruments that invest in credit default swaps or non-cash assets to gain exposure to a portfolio of fixed income assets. They are typically divided into credit tranches based on the level of credit risk assumed. Initial investments into the CDO are made by lower tranches, while the senior tranches may not have to make an initial investment. All tranches will receive periodic payments based on the cash flows from the credit default swaps. If a credit event occurs in the fixed income portfolio, the Synthetic CDO and its investors become responsible for the losses, starting from the lowest rated tranches and working its way up.

If you didn’t get it, don’t worry. Even Finance people have a hard time understanding that. I think it was meant to really have a shroud of mystery in order to justify the fees and attract buyers without seeing the “junkness” of it! 🙂 Now let’s watch how Richard and Selena explain it in simple language in this scene from the movie. (you may go straight to minute 1:32)

So there you go, as they explained it in casino language, Synthetic CDOs are side bets on an original bet. This can go on and on such that an original bet of $10 million can be transformed into billions of dollars!

Another principle that was explained in the short video is the Hot Hand Fallacy commonly observed in basketball. A player makes a bunch of shots in a row and people are certain that he’s going to make the next one. People think that whatever is happening now is going to continue into the future. This is exactly what happened in the real estate market that built up into the crisis. Real estate prices were going up. Housing loans were given away at a rate faster than how Oprah could say, “You’ve got a car! You’ve got a car!” Even low-income earners were buying a multiple number of houses with low amortization and teaser rates which they probably didn’t quite understand. Then all these mutant instruments proliferated. When the music stopped, everyone was holding an empty bag, except for a few ones who knew and acted on what was happening.

My persistence paid off, Marvin and I had a meeting with him in April at his office at the beautiful campus of the University of Chicago. Upon seeing us at the waiting area, he gave us a warm handshake and hug, and a buzz on my cheek. Inside his room, he led me to his desktop computer, “Come look at this. My wife, who’s a photographer, has been to the Philippines! She has taken great pictures there.” He showed me beautiful photos alright, but they were all slums and other dramatic images of poverty. I said, “Wow! Beautiful! But the Philippines is much more than that. You should come see for yourself.” 🙂

I was very happy to tick a major item in my bucket list having an engaging conversation for an hour with the Father of Behavioral Economics! It was almost surreal. Huwaw! I got to discuss with him what I’ve been doing to help bring Behavioral Economics to the Philippines, the applications I’ve been using, even the small things at home as a parent actively using Choice Architecture (the use of design in presenting choices such that the intended option is more easily picked) even before I learned that label.

We presented to him the Philippine story (the growth and how it is much more than the images dramatically captured by his wife). We discussed how we could collaborate to come up with measures that would really work because as proven in various studies, including an elaborate meta-analysis on hundreds of financial literacy interventions, financial education alone does not work! (Yes, that’s true, but more on that in future articles). We also discussed with him our OFW phenomenon and many more.

Long before our trip, I asked the top universities in our country if any of them offered a course in Behavioral Economics. No one does. At most were some attempts, a subject taught as an elective but was later on discontinued. In my last meeting with Ateneo de Manila University, my alma mater, particularly the Dean of Economics where I graduated, they expressed their interest in hosting the Father of Behavioral Economics in school event(s) should he decide to come visit our country.

There was one point in our conversation when I asked Mr. Thaler, “How can I become a full-fledged Behavioral Economist? Do I have to take up a course?” And this is what he said, “No! You don’t have to come here and waste four years of your life studying. You’ve read and studied everything you need to know. You are a Behavioral Economist! Just get to work!” I asked in jest, “So can the Father of Behavioral Economics bestow that title on me now?” He said, “Yes! Let’s do that!” We both stood up, then I kneeled down and he made the gesture of bestowing the title of The First Filipino Behavioral Economist on me! It was hilarious but yes I’m taking that seriously. As he said, “The most important thing is to get to work!”

Marvin and I got a lot of insights from our meeting with the Father of Behavioral Economics. I will share our three-way conversation in future articles. For the meantime, here’s a short video with Richard Thaler giving his message to the Filipino people.

I find Behavioral Economics very exciting, helpful and practical. Let me end with the mantra of Richard, “If you want to encourage people to do something, make it easy!”

1. Marvin Fausto and I will give a talk to the TGFI Singapore chapter on the Psychology of Money scheduled on July 30, 2016. Inquire with your TGFI Singapore leaders Rex Holgado and company. 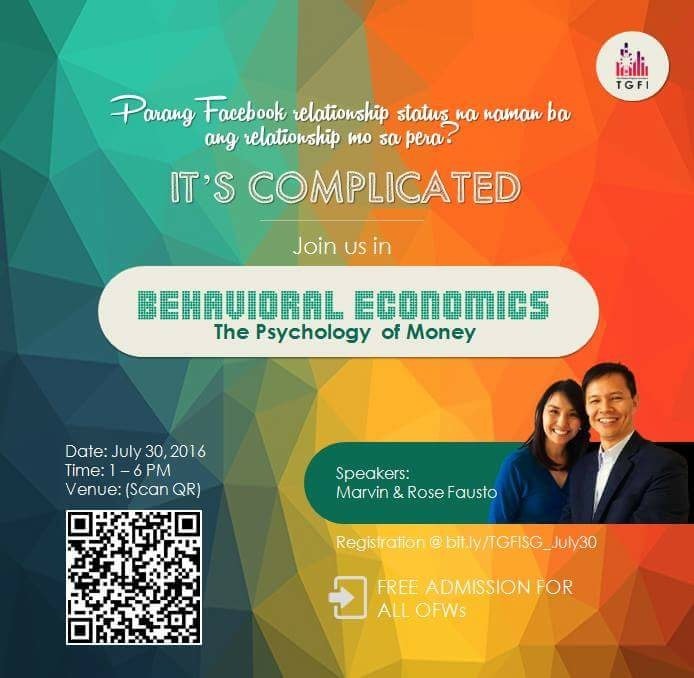 2. Watch out for my FQ talks in cooperation with Security Bank. Dates and venues to be announced.

ATTRIBUTIONS: Photos from the-millshop-online.co.uk. Videos and screenshot from the movie The Big Short, and the author. Definition of Synthetic CDO from Investopedia.