I’ve been a Globe subscriber since way too long ago. There are times I’m happy with their service, there are times I’m not! But I never resorted to ranting on social media, which seems to be a common practice now. Well, maybe it’s because it’s the one that gets the fastest solution.

My own sad story. This happened last year and I opted to just write to them directly. It took two months to settle the whole thing.

I received a letter from a certain Telan Law Firm representing Globe accusing me of a significant amount of unpaid balance. There were a few grammatical errors and used the wrong name – it was the correct name in the heading of the letter but the wrong name in the salutation part “Dear Mr. _____.” My initial reaction was, “Maybe this is another one of those scams that use Globe’s name. So I wrote to Globe with the heading “Is This a Scam?”

After a few days of not getting a favorable reply I tried to figure out what it was and found out that it was Globe’s mistake, an error in handling information updates after I requested for some changes in customer information. I had the name replaced from my husband’s to mine, a process that is standard as they already have set rules to follow for it.

It was irritating to receive phone calls from the law firm and not seem to be understood when I explained to him, “How in the world could I still have this postpaid service if I had that outstanding balance? Doesn’t Globe cut the service when our dues are unpaid?” And this was a fresh incident for me then because I had just experienced not having my cellphone services while abroad, again due to this same mishandling of customer information updates.

So letters to Globe were sent with attachments of currently paid (no past dues, take note) billing statements that their office sent me on a monthly basis. I also requested them to clear my name from any past due records they may have inadvertently created. I have really been OC about keeping our credit ratings clean, maybe because I know its importance, having started my career at the Credit Department of a bank.

It was settled after a few exchanges, and with the help of a son’s friend who worked with Globe, but not after a few spikes in my blood pressure.

I’m not here to lynch Globe. I know things like this happen even to the best customer service providers. It’s just a matter of addressing the problems in a timely manner that should still (hopefully) leave the customer with a happy heart. I still want Globe to be profitable as I’m still holding on to my shares in this company. 🙂 But here’s something about making profit. In order to make profit, there is cost of doing business. Obviously, one of which is to provide billing statements to post-paid customers.

The Text Message. On Monday I received this message from Globe: 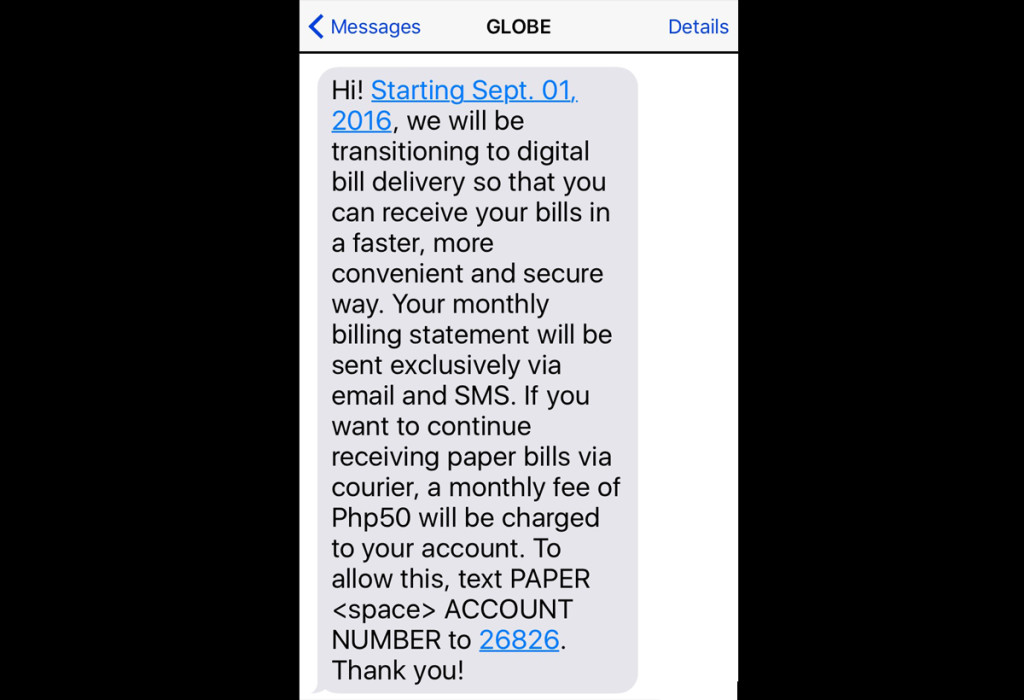 Here are the words:

Hi! Starting Sept. 01, 2016, we will be transitioning to digital bill delivery so that you can receive your bills in a faster, more convenient and secure way. Your monthly billing statement will be sent exclusively via email and SMS. If you want to continue receiving paper bills via courier, a monthly fee of Php50 will be charged to your account. To allow this, text PAPER <space> ACCOUNT NUMBER to 26826. Thank you!

From zero to PhP50. Saan aabot ang 50 pesos mo? In terms of their services, this can already give you unlimited call and text all-day, free surfing, or unli calls to Globe/TM, unli all-net texts, and 50MB surfing for 3 days, or 7 days of unlimited texts to Globe/TM, or Spotify, Youtube, Facebook, IG, Tweeter, and probably a lot of other combinations.

So the PhP50 additional charge has a real, concrete and easily quantifiable value to the Globe customers. If Globe wants to make its post-paid customers feel a bit more special for being pre-committed to Globe, then they should not make them feel bad by passing on the cost of doing business just because there is an excuse to eliminate this cost in the guise of being environmentally friendly. This cost is currently being shouldered by Globe (and rightfully so) so why all of a sudden pass it on to the customers? Ah… maybe a bright employee suggested, “Let’s charge them additional PhP50 in order to nudge them to do the right thing for the environment! Anyway, these are post-paid customers who probably don’t count pesos and centavos!” But not so fast… It’s usually more than just the amount.

The Backlash on the Bank of America (BA) $5 Fee. Globe may want to know that in 2011 Bank of America announced that it would start charging $5.00 every month on the use of its debit card facilities. The customers were outraged and called it the fee that went too far. More than 300,000 signed an online petition to stop the planned fee and more than 21,000 people pledged to close their BA checking accounts! One cable news anchor cut up her card on air. Shortly after that, BA abandoned the fee. (To read the Washington Post article, click this link.)

THE POWER OF DEFAULT BIAS. As your long-standing customer (and minority shareholder), let me give my unsolicited advice.

No matter how strong-willed and independent decision makers we think we are, we are all prone to going with the default bias. Let me show you a graph of Europe’s Organ Donation:

This was taken from the study of Eric Johnson and Daniel Goldstein in 2004. The countries on the left – Denmark, Netherlands, UK, Germany – are low organ donor countries, while those on the right – Austria, Belgium, France, Hungary, Poland, Portugal, Sweden – are high organ donor countries, reaching practically 100%. Now if you’re going to ask people to figure out why the difference, they may come up with profound and fundamental reasons such as culture, religion, economic standing, etc. But these are not the reasons because many of the similar countries close to each other are found on the opposite sides.

So what’s the reason for the stark difference between these two sets of countries? It’s in the DMV (Department of Motor Vehicles) forms. In our case, that would be the forms that we fill up at the LTO (Land Transportation Office). Here’s the difference:

Nonetheless, if you ask the citizens of the high organ donor countries, they will never say they decided so because of the form. They will definitely say all those profound humanitarian reasons.

So Globe, you did the right thing in making paperless billing as the default option. Congratulations! However, charging us with the cost of doing your business leaves an unpleasant feeling. In the words of some netizens who reacted, “Nakakainis!” “Ang kapal!” “And how about a rebate each time you give us crappy signals?” (Of course, these are just the more subdued reactions, as I didn’t include those with curses anymore.)

Again, why should you charge us what is rightfully your cost of doing business (and a very profitable one at that) in order to further nudge us to do the right thing? As I said, our bias for default option is already very powerful and would have given you your desired outcome.

If you wanted to ensure your desired outcome, you could have further nudged us with positive reinforcements:

Well, it’s still in September so I hope you consider this carefully. It will be a nice birthday gift for me to know that one of the companies I’ve patronized for the longest time listens to its customers.

ATTRIBUTIONS: Photos from affordablecebu.com put together to help deliver the message of the article. Defaults and Donation Decisions by Eric Johnson and Daniel Goldstein.

MONEY LESSONS WITH FQ MOM AND SONS (Kumu Episode 2: What is the Second Basic Law of Money?)

MONEY LESSONS WITH FQ MOM AND SONS (Kumu Episode 2: What is the Second Basic Law of Money?)